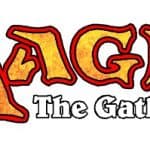 You are reading
New Magic: the Gathering Commander Decklists Revealed by Wizards of the Coast

On November 1st, Wizards of the Coast will release Commander 2013 on the Magic community. There will be five brand new Commander Decks, each fully-fleshed out with 100 cards, creating a deck that’s playable right out of the box. Today Wizards has released the decklists for all five decks, and we can take a look at what we’ll be getting into before the release. Let’s take a look at each decklist and see what’s coming!

First up is Eternal Bargain:

This deck is led by Oloro, Ageless Ascetic.  This giant soldier lets you gain lots of life, which you’ll need with cards like Phyrexian Delver and Phyrexian Gargantua. It looks like this deck plays off of a lot of card advantage, and with Oloro being your Commander, you can recoup some of the life being lost to your cards.

Next is Nature of the Beast:

Now this is my kind of deck. It’s similar to my Commander now, Mayael, and I like that. Marath, Will of the Wild commands this deck, and he’s a big nasty. He gets counters when he enters the battlefield equal to the mana cost to cast him, and you can remove counters by paying mana and you can either damage other creatures, place counters on others, or put Elementals into play. This deck uses a lot of tokens and big creatures to just overwhelm your opponent. Who doesn’t like to beat face?

Then we have Power Hungry:

This deck is run by Prossh, Skyraider of Kher. With an effect somewhat mimicking Marath’s, when you cast Prossh you place an amount of kobold tokens into play equal to the amount cost to cast him. You can sacrifice creatures to Prossh to make him stronger, making it easier to go for the Commander kill. Cards in this deck put tokens into play just for the fodder, making things teeter out of control quickly.

Mind Sieze is up next: 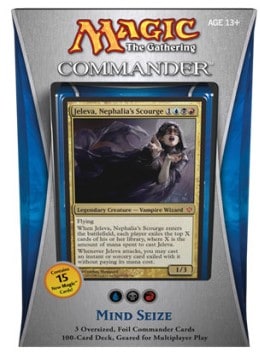 In typical Grixis play, this deck controls the pain of your opponent. Jeleva, Nephalia’s Scourge is this deck’s Commander, and she’s a deadly vampire wizard. This deck forces your opponent to exile cards, giving you strict card advantage. With cards like Baleful Strix, Echo Mage, and Guttersnipe, there’s all sorts of reasons for you to play the plethora of spells that come with the deck.

Finally we have Evasive Maneuvers:

This deck’s got it all – angels, wizards, birds, and even bird wizards. Derevi, Empyrial Tactician commands this deck with an iron talon, allowing you to tap or untap permanents when she enters the battlefield or a creature you control deals combat damage to another player. What’s even better with Derevi is that she has a low cost, but she’s also got a printed ability that lets you simply place her onto the battlefield from the command zone for 4 mana. That cost doesn’t change, no matter how many times she’s been removed from play. The deck sports a lot of combat tricks, allowing you to get the upper wing in combat.

So far I am the most impressed with Nature of the Beast, though Mind Seize is a close second. These Commander Decks look great, and they’re nearly upon us. Which one will you play? What would you add/remove from the deck?