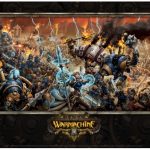 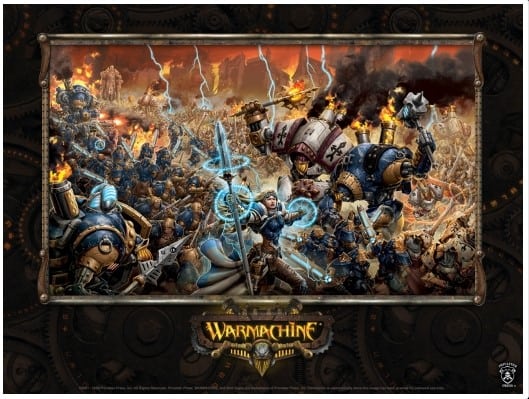 Players who are new to Warmachine will most likely pick up a two-player Battle Box, or a starter set for a faction of their choice. These products are great starting points for the game because they come with a read-to-play 15-point army to field. You see, games of Warmachine are played with armies that are built on a point system. Each model costs a certain number of points to field, and players agree on a point threshold to play with. They then build armies to fill the selected number of points, and take their battle to the table. But what’s in building a list? How do you go about building a list that will suit your play style? That’s what we’ll explore here in this guide.

When it comes to list building, first you need to decide what faction you’ll be playing. Most of the time you’ll already have figured this out, especially if you’ve picked up a starter box. It’s important to know, though, that what’s in the box is not all the faction has to offer. I’d heavily recommend that, once you’ve decided on the faction you want to play, you pick up the Forces of Warmachine book for the faction you’ve chosen. It lays out plenty of fiction and back story for the faction, and most importantly it details each of the models available for it. The book includes stats, tactical tips, and fluff on the faction’s extra warcasters, units, characters, solos, and warjacks. It’s got everything you need to become familiar with your faction’s tactics.

Then you’ll need to decide what sort of list you’ll need to build. Like I mentioned, games of Warmachine are played at different point levels. Here’s an example of some of the common point thresholds for games:

Most of the time we play 15pt Duels, and plan to be moving up to 35pt Skirmishes. Duels are easy to set up, and play very quickly. They’re perfect for pick-up games or teaching new players. For the sake of an example, let’s say you’ll be playing a 15pt Duel, so you’ll need to construct a 15pt list for an army of your faction. Each model has its own point cost, and you can see this in the Forces of Warmachine book for their faction. They also contain something called a Faction Allowance, which is usually a numerical stat that tells you how many of each unit you can have in your army.

A model’s Faction Allowance will be printed on the bottom right of their card. 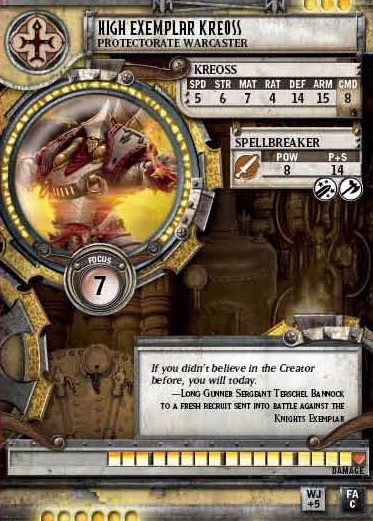 Each warcaster has a Warjack Point value on the bottom right of their card.

So, you’ve gotten your faction down and decided to work on a 15pt Duel list. Now it’s time to start selecting models. Each army is led by a warcaster, so that’s where we’ll start first. Warcasters don’t count towards your point limit – quite to the contrary actually. They have a value called Warjack Points that can be spent to add warjacks to your army. These points actually add to the total points you have to spend. As an example, let’s say you’re building a 15pt Cryx list and you’ve chosen Iron Lich Asphyxious as your warcaster. His Warjack Point value is 6, making your total points to spend 21. The trick here is that you can only use this boost to purchase warjacks. Going back to the 21 points total you have to spend, you choose to add a Corrupter to your army. This warjack costs 5 points, so your total becomes 16. You can continue to add more warjacks to the army, and have an extra point to use on them. Adding units, solos, and characters, however, will take from the 15 points total you have from the initial setup.

When I build lists, I look for synergy. I want models that work well together and off of each other. Each faction can work of synergies, and it can become devastating to an opponent when facing a well-executed list. You’ll want to look at what spells your warcaster has as well as what their feat does. With this information you can get to work adding models to your army that compliment those attributes. 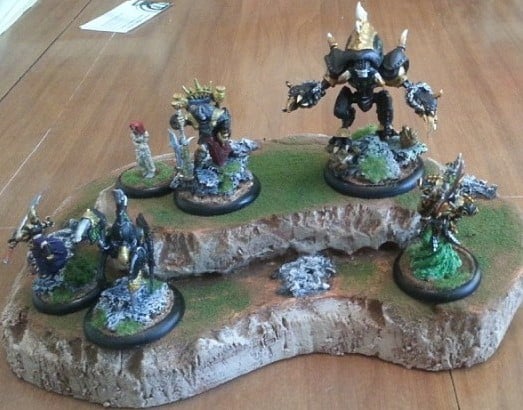 My Cryx models, all together.

I recently put together a 15pt Duel list for Cryx, as I’ve switched to using them as my main faction. Here’s what my list looks like:

With this list I am currently at 13/15pts. It’s becoming a bit difficult to decide what to add to this list to fill out the 15 points, but I have some ideas. My basic idea behind this list is to utilize the power of my Seether jack to crush anyone in its path, as it gives itself a focus each turn. The Warwitch Siren runs along with the Stalker jack, giving it a focus with her special action. Since my two jacks are pretty reliable, this makes them nearly self-sufficient, allowing Goreshade to keep all his focus for himself. If things get out of hand, I can feat with Goreshade, which puts a full unit of Bane Thralls on the field. With Bane Lord Tartatus in my army, those Bane Thralls become even more powerful and can do some real damage. So my entire army synergizes, making it an effective set of models to field.

There are many different things to consider when looking at list building, but it all really boils down to what you prefer. A lot of it has to do with the warcaster you choose, as he/she will be the backbone of your army. Basing the models you choose off of the abilities that your warcaster has is always a great idea, and it will provide a lot of fun styles to play with.

If you’re starting out and hoping to begin building lists, the above tips should help you get going. There are a lot of cool websites to help you put lists together, such as Forward Kommander and the Warmachine & Hordes Gizmo. You can also reach out to other players and scout the Privateer Press forums, as they are both valuable resources straight from the community. No matter the faction you choose, your list is an important part of the game, so get to work and start building!

Warmachine – Building a Scenario Board