You are reading
Warmachine – What is a Warjack?

Warmachine wouldn’t be Warmachine without Warjacks. We’ve already taken a look at Warcasters – powerful battle mages that excel on the battlefield – and now it’s time to look at what some would consider the cinder block of a Warmachine army – Warjacks! Warcasters have the innate ability to control Warjacks – giant hulking steam-powered robots of war – using only their mind. They can see through the eyes of the ‘jack and give it commands on the battlefield, making the pair an extremely dangerous foe.

The “Apsis” Light Myrmidon from Retribution of Scyrah.

First of all, let’s take a look at a little bit of detail on the Warjack. The first Warjacks were called Colossals (ironically since now we actually have Colossals to play with in the game). They were developed during the Orgoth invasion with the help of the dwarves from Rhul. This was also when the first Warcasters appeared, and with their synergies combined, the people of Caen were able to drive back the Orgoth and retake their home after four centuries of enslavement.

Warjacks were produced more heavily after the invasion, as the Colossals were abandoned due to the peoples feeling they were too impractical. These machines of war are powered by a coal-burning steam engine, and guided by a computer-like “brain” called a cortex that’s housed within their chassis. This cortex allows the jack to operate on its own, as well as link to their Warcaster’s mind. 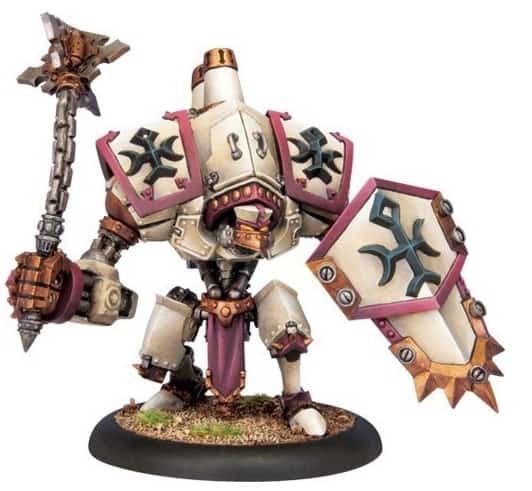 An early version of the “Templar” Heavy Warjack from Protectorate of Menoth.

It’s important to note that Warjacks are only a small portion of the multi-ton, steam-powered robots in the Iron Kingdoms, which are called steamjacks. Steamjacks were developed to aid in a number of tasks, mainly for tasks involving labor and construction. Warjacks were developed specifically to hit the battlefield during the wars that broke out across western Immoren.

When it comes to gameplay, Warjacks are very powerful. Each faction has their own unique ‘jacks, and some factions don’t even call their ‘jacks, well, Warjacks. For instance, Cryx light Warjacks are called Bonejacks, and Retribution heavy Warjacks are called Myrmidons. No matter what you call it, a Warjack is a walking death machine built to wage war, and that’s what it does best. 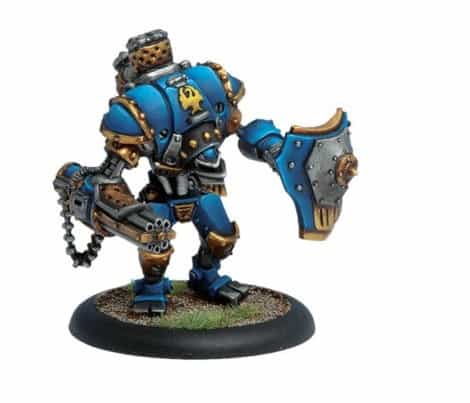 Warjacks are usually fielded in battle groups with a Warcaster. These ‘jacks receive orders and commands from their Warcaster, which make them perform actions on the battlefield. During the game, Warjacks can be given focus from the Warcaster, allowing them to perform a number of different actions, such as:

While it’s very beneficial for a Warjack to be given focus, it can operate without it. This is important to remember, because if a Warjack is ever outside of its Warcaster’s command range, it cannot be given any focus. ‘Jacks can advance, and make initial attacks all on their own without focus. It’s implied that they are just operating off of mental commands sent by the ‘caster.

Warjacks are heavily-armored, but they can (and will) take damage on the battlefield. In the game, the way this damage is tracked is through marking a damage grid, which looks something like this: 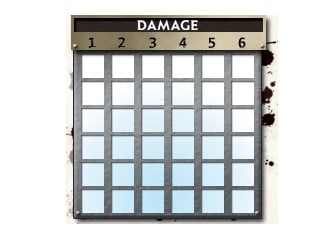 Each Warjack has their own damage grid printed on their corresponding card. These grids will have letters in them – L, R, M, C, A, H – that correspond to different systems on the ‘jack. These systems are:

When a ‘jack takes damage, you determine how many points it takes and roll a D6 to determine which column the damage starts in. For example, if my ‘jack were to take 5 damage points, a D6 would be rolled to see where the damage went. If my opponent rolls a 3, then I’d start at the top-most box on the third column and mark 5 boxes going down. When a column gets filled, you move to the top of the next column and continue.

When all of the boxes containing the same letter are marked, that system is damaged and the ‘jack loses its use. Another example: if my ‘jack takes enough damage to mark out all the boxes on its damage grid containing a “C”, then its cortex would be permanently damaged. Each system provides a different drawback when damaged, but for the example, when a ‘jack’s cortex is damaged it loses all focus and cannot spend or be given focus for any reason. In some rare occasions you could have mechaniks that have the ability to repair damaged ‘jacks, and it is possible to repair damaged systems. So there is an opportunity to get those systems back.

Once a Warjack takes damage in all the boxes on its damage grid, it’s considered destroyed. Technically there are steps for destroying ‘jacks, which follow the disabled>boxed>destroyed rule, but unless you have any abilities in play that trigger during these steps, a ‘jack will simply be removed from play once it takes enough damage on its damage grid. When a ‘jack is destroyed, often times players replace the destroyed ‘jack with a wreck marker, which provides more terrain.

Drago, a Character Warjack from Khador.

Warjacks come in all shapes and sizes. Through play they bond with their Warcasters, making them easier to control and stronger on the field. These monstrous robots range from your run-of-the-mill ‘jack to character ‘jacks that can only ever have one included in a single side or army. No matter what type of Warjack you choose, they’ll be useful in a battle. Each Warcaster works with ‘jacks suited to their play style, but sometimes ‘jacks can be included that work completely on their own.

With Warcasters and Warjacks, you’ll have a small army that’s ready to field. Privateer Press sells battle groups that consist of a ‘caster and a few ‘jacks, and it’s a great place to get started. We’ll be looking more into some of the factions in detail soon, and they’ll each have their own units, troops, and battle engines to go over. So keep it parked, and hang on to your metal!