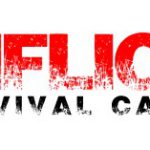 You are reading
Written Review – Conflicted : The Survival Card Game

If you have broad experience in regards to playing tabletop games, chances are you’ve played at least one survival game taking place after the apocalypse or the collapse of society. Whether it be alien invasion, zombies, or government gone out of control, we have all seen games that tested our survival skills with resource management, playing actions at the right time, and outlasting your fellow players. Or maybe you are a survivalist simply wondering just how prepared you really are for that worst-case-scenario that you’ve been preparing for. Are you really prepared to survive against the scum of humanity if the worst case scenario were to present itself today? Where do your priorities and loyalties lie? And the most important question, do you have the skills, knowledge, and compassion to survive the collapse of society while still maintaining what makes us human? In Conflicted : The Survival Card Game, you will find out.

Conflicted comes in a clear plastic case and contains 54 total cards. Two of these cards are rules, and the other 52 are the questions and scenarios that your group will face. The back of the cards bear a man looking quite prepared for a post-apocalyptic situation, carrying rope, a canteen, a gas mask, gun, and other survival equipment. The fronts have scenarios with the Conflicted logo at the top. The cards aren’t flimsy and sustain well under vigorous shuffling.

The only other thing you will need is your best survival instincts.

First things first, Conflicted wants you to assume that the world we live in has taken a turn for the worst, as each card will outline an idea of what kind of disaster you are dealing with. Conflicted will also show you who the leaders among your peers are, and who may not be the best person to turn to in the event of a global catastrophe.

Once your group has been assembled, all of the scenario cards are shuffled together and placed between all players. Choose a player to draw first. This player reads a card to the person to their left. The only person allowed to answer this scenario at this time is the person being directly asked, and they are given 3 minutes to describe their plan. Everyone else must remain silent, or it may skew this person’s answer. Once answered, remaining players rate that person’s answer on a scale of 1-3. Once scored, players may discuss the answer and differing opinions of how to handle this scenario. Depending on your group, you may vote openly or do this in secret, as in a real situation, some may be more vocal to disagree than others. The person at the end of a round (generally defined as each player having answered 3 questions each) with the most points wins!

Front and back of scenario cards.

If a player has a question about a scenario (i.e. how many children are present? what season is it?), the player asking the question may provide details, keeping it as close to reality as possible. Conflicted may also be modified for various modes such as breaking up into teams, simply debating the question rather than scoring, or building upon the question with additional details.

Humanity and Survival Can Go Hand in Hand, Right?

With the understanding that Conflicted would be unlike any other card game I’d ever played, I chose to approach it with no expectations. Even if I had brought them with me, I was not prepared for what this game actually was. I anticipated to have my survival skills challenged and questioned, but I didn’t know how deep into my humanity these scenarios would delve.

There are only a small handful of games that leave me emotionally exhausted. Conflicted not only did that, but left me stunned at how unprepared I am in the event that anything catastrophic would happen to our country or the world. Not only did I learn a lot about myself and the lengths I would go to in order to protect my family, but I learned a lot about my friends. I was surprised to see someone who I didn’t expect to come out on top as a leader do just that, and also amazed at the clueless stares that emitted from myself and some other friends who I thought wouldn’t think twice about certain situations.

A card came up that questioned what I would do in a scenario where my child starved to death because of a well-stocked person that I felt was refusing a barter out of greed. Having a child really did make this question ten times harder than it would’ve been if i wasn’t a parent. I don’t even want to talk about my reaction. I will say this, though – the debate portion after I was scored did make me reconsider my answer (only slightly), but it was very conditional of the situation.

I really enjoy the rules and order in which things happen in the game, because when playing for points, if everyone speaks up during an answer, the answer is likely to change. I do feel that debate is one of the best parts of this game, but hearing someone’s initial reaction is vital, as it shows where their mind may be at, or how they’d react in a situation where they had to make a quick decision. The debate part provides you with a peek into the way your friends work and how they think they’d deal with a life or death situation, but it also informs. If you are playing with someone who is a prepper for end-of-the-world situations, you could learn information you never knew, or gain ideas you may never have thought of otherwise.

Conflicted : The Survival Card Game is a terrifying eye-opener, as well as an amazing learning experience. I’ve walked away from the game knowing what things I am prepared for, and what things I don’t know if I would survive.  I think it is very important to play this game with people you know. Personally, I wouldn’t want to play this game with a stranger for a couple reasons. One, you don’t know a lot about this stranger and the things that have happened in their life that may lead them to a certain answer, which may just seem terrifying to you. Two, ties into one because it might cause more paranoia and judgement of people you don’t know, something that is bound to happen in a real-world situation. I think that knowing your friends and family that you play this with plays its own role. You may be more understanding to their reasoning, yet at the same time, it could really open your eyes to who your friends and family really are. Would they shoot on sight of any potential threat, would they assess the situation, or would they simply run from it? Your own views on it may make you think to yourself “Well, I always thought I’d bug out with this person, but given this situation…maybe not”.

I can say without a doubt that anyone who considers themselves to be a survivalist, prepper, hoarder, or any variant of these would love this game. It will challenge just how prepared you really are and point out the areas in which you may need to do more. If you are a gamer and fans of survival/apocalyptic games, I feel that this would be an amazing change of pace that takes you out of the fantasy what-if mindset, and put you in a realistic what-if place. I think that everyone who plays this will walk away from it with a curiosity of what others would do, as well as being more open to considering their plans if something catastrophic were to happen to them.

As far as age range, I think that should be up to a group. There’s no nudity or profanity on the cards themselves, but it is definitely targeted towards a more mature audience. I’d like to say 18+, but given varying maturity levels and how different people/families operate, I think that people aged 16+ would also be able to participate. Conflicted : The Survival Card Game is  $9.95 + shipping inside the United States, and is $15.95 + shipping throughout the rest of the world, and can be purchased at the game’s website. I would highly recommend this to, well, anyone. If the end of society as we know it falls on us, no one is exempted from surviving from that moment on.

Note : Make sure to peek around at the game’s website, as there is a poll for votes on the next deck theme, as well as the ability to submit your own scenario and a chance to win a deck!