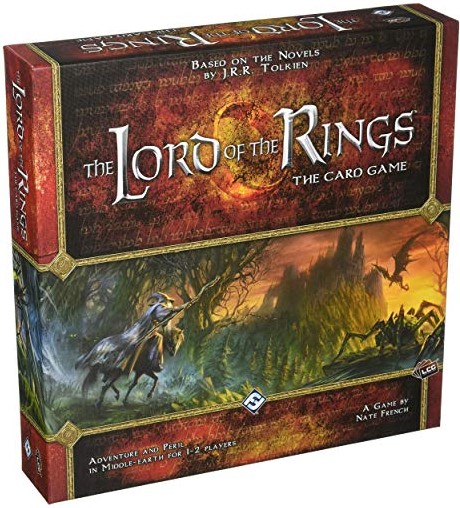 Welcome back, readers! It is time for another foray into the world of storage as we look into a game that has an abundance of cards and components. That game is The Lord Of The Rings – The Card Game.

With adventure packs being released monthly and deluxe expansions coming out frequently, storing this beast becomes a daunting task. A task so great that it would take a fellowship to abate. But lets see if we can solve it without having to sneak attack Gandalf.

Here is what we have before us with all of the adventure packs, deluxe expansions and two core sets. Already we have a small storage system in play, but this is a temporary fix as the quest cards are quickly overtaking the player cards. It would take all of Thalin’s might to stop the current onslaught!

On a trip to our local hobby store, we came upon an art box about the size of an average briefcase. Upon closer inspection, we realized that it would perfectly fit all the cards and have room for future expansions. After purchasing the box, we opened it and took out everything inside of it.

As you can see, this leaves a lot of room to put all of the cards and components, but nothing to keep them from moving around.  The next step was to take what we could from the box and make the rows available to keep everything in it’s proper place.

We dismantled the upper brackets in order to get the three boards we would need to make our rows. This was a mistake, as we will need to purchase a small board to build the upper bracket again as it is a wonderful place to both hold the rules and keep everything steady in travel. We cut the three boards down to fit in the box and, using a card and wood glue, glued them firmly in place.

After the glue had time to dry, we began the daunting task of placing all the cards in to the box. The darker segments are where we used the hero cards to differentiate the spheres from each other, as we have those sleeved differently. Each type of card is also separated by a series of dividers that we printed out.

And with that, we have completed our quest for a storage solution in such a way that even Gimli would be proud. There is plenty of room for future expansions, and it holds all the components as well.