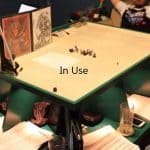 You are reading
RPG Gaming Table Plans On Kickstarter

Funding this project enables Jim Barnes, the creator, to develop plans to build this table with the least amount of equipment and for the least amount of money, while still making a sturdy and durable project. The most recent goal that was unlocked includes the feature of a collapsible set of plans to store the table easily, as well as optional drawers. The hope is to make these tables as customizable as possible, but to give the plans for all features.

This project will end on October 4th, and by the looks of it will be well over-funded, but as each stretch goal is unlocked, more features are being added to the list of modifications that will be included in the plans. There are many pledge levels that include various takes on what you would receive by backing this project. With the amount that has been raised so far, its clear that this project has a lot of potential and has already interested more than 100 people. Check out the video and pledge levels at the Kickstarter page to see if this is something you’d like to get behind!