You are reading
Denizens of the Underworld – Sixth Deluxe Expansion for Call of Cthulhu: The Card Game Announced

Fantasy Flight Games has just announced Denizens of the Underworld, the sixth deluxe expansion for Call of Cthulhu: The Card Game. This expansion focuses on some of the rogues and shadowy figures of the Syndicate. Criminals and racketeers conduct business openly, all under the watch of Danny O’Bannion, the criminal kingpin. With this expansion we take a look at some of the more manipulative ways to get around things when it comes to tackling the game’s story cards, and of course we’ll see some muscle thrown in to get things done. 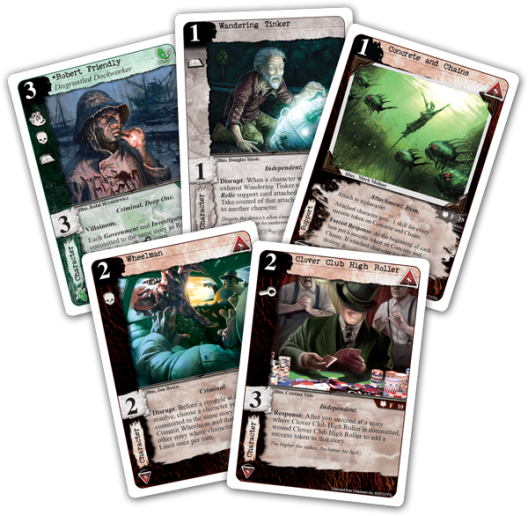 Denizens of the Underworld includes 165 new cards for Call of Cthulhu: The Card Game. Just about two-thirds of these cards deal with the Syndicate, arming them with new characters, tools, and tricks. With these cards, you’ll be able to put more strength in your decks that include cards with the Criminal subtype, and deal with underhanded tricks through new Tactics. Since we can’t forget about the powers that be, a new Ancient One will show up in the expansion as well, along with a new cop to tackle the criminals of Innsmouth’s underbelly. 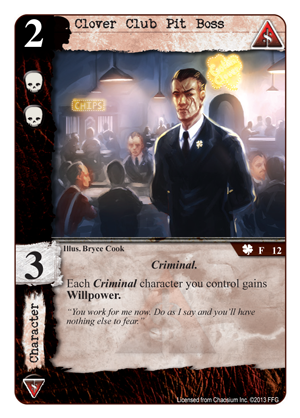 To the Syndicate, strength comes in numbers. With Denizens of the Underworld, your characters with the Criminal subtype see their numbers increase dramatically. There will be sixteen brand new Syndicate Criminals, ranging from men at the top like the Clover Club Pit Boss and trickling down to the getaway guy who takes the fall for an operation. There are even characters like Robert Friendly, who aren’t necessarily an integral part of the Syndicate, but lend their services when needed. There are Criminal friends all over the place! 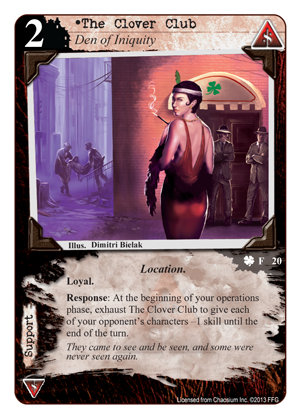 The Clover Club has long-since been a front for the Syndicate’s criminal organization. This new expansion finally takes a closer look at this lavish “night club”, and shows us just how this organization does business. While The Clover Club is in play, it forces your opponent’s characters to suffer -1 skill until the end of the turn. I’ve always said it helps to do business from home, and this card proves it.

Though Denizens of the Underworld looks deeper at the organizations working in the shadows, but the Syndicate isn’t the only faction to gain power from it. Each faction will find new Tactics, and there’s even a neutral Tactic that will aid just about any player. By managing your cards right, knowing when to load the dice, and keeping up your front, Denizens of the Underworld will see to it that you’re the one in the seat of power at the end of the night. You can look forward to this expansion during the fourth quarter of this year.