You are reading
Written Review – Smash Up: The Obligatory Cthulhu Set 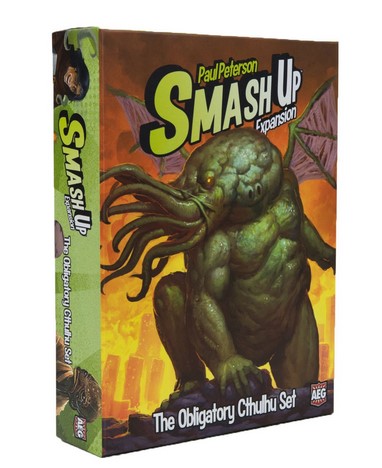 The mix-matched alliances in the world of Smash Up work to take down another base to mark it up as a victory, when the minds of the weak are filled with strange voices. From over the horizon march the newest members to this world, and with them, all the Madness of the Elder Gods and those that work to keep them restrained. Will you join forces with Cthulhu’s Minions, or will you fight off Madness and destruction with the students of Miskatonic University? Or will you be unwillingly lured by the Madness wrought by The Elder Things?

The Obligatory Cthulhu Set adheres to the game mechanic by Paul Peterson as seen in the previous Smash Up sets. Cthulhu invaded the Smash Up world in September of 2013, with an early limited escape at Gen Con 2013.

The art styles in The Obligatory Cthulhu Set match those of the preview Smash Up games by the many artists at AEG. Tokens are sturdy, and the cards of great quality as with its previous sets.

Since this is the second expansion to the core Smash Up game, I am going to skip the traditional rules, and guess that you already know how the basic game works. Just in case though, check out the review for Smash Up and Awesome Level 9000 for an overview. We are going to discuss new additions to the game with this expansion and what the new factions are bringing to the fight!

A new card type seen with this set is Madness cards. Madness enters your hand through various ways. Some bases require you to draw Madness cards when playing on them, as well as text on Action and Minion cards across the 4 new factions. Madness can actually accelerate your deck if you choose to keep it and use it for its action (Draw two cards), but allows you to discard it by taking your action turn.

So why do you want to get rid if it? At the end of the game, for every 2 Madness cards that remain in your possession, you will lose 1VP. Let’s say that you “win” the game by reaching 15VP, and your opponent has 14VP. However, you have 4 Madness cards within your deck, and your opponent has 1, or 0. Your final score will drop to 13, and theirs will remain 14, and they win the game.

Don’t have any Madness? Here, we’ll share the wealth.

Now, we’ll get into the factions. The first one we will look at is Elder Things. Elder Things contains a variety of terrifying creatures whose sole purpose is to drive you mad (and load up on Madness cards), destroy your minions, and make a victory seem flawless. While Elder Things have their weaknesses, their strength is in forced Madness draw. Actions that give opponents a choice to take Madness or you draw a card, along with others that force all opponents to take Madness at the drop of a card, make for an overwhelming force. Can you imagine them paired with Wizards?

Don’t be fooled by the low strength of the Locals!

Join the forces of Innsmouth! The locals are dying to meet you. The only minion card type found in this faction’s deck is a 2 strength The Locals card, but it can get out of hand very quickly. When one is played, the top 3 cards from your deck are revealed, and all The Locals go to your hand. Nearly all the actions in this faction have something to do with pumping all friendly minions with power 2 or less, playing additional minions that share a name, and other multiplying effects.

Working for Cthulhu himself is maddening!

The Minions of Cthulhu are out to do their master’s bidding, and they do it well. I think the best way to describe the Minions of Cthulhu is organized chaos. While these forces will press on regardless of Madness accumulation, they come equipped with ways of getting rid of it – specifically into the hands of their opponents. Minions of Cthulhu will escort your strategically placed minions onto other bases, and send them along with some Madness to sweeten the pot!

A little give and take from Miskatonic U!

The last of the new factions in this set is the ever hopeful students of Miskatonic University. Perhaps a little too eager for their own good, the students take many risks by suffering Madness in order to get a better result (by playing more actions and/or minions on a turn). Thankfully, the staff comes equipped with methods for removing Madness without taking you entire action to do so. Everything in moderation – through science.

Some helpful, some harmful, 8 new themed bases come with this set. These bases allow other factions to utilize the powers of their opponents whose forces they do not have on their side, and with some combinations, can be harmful, or can completely change the direction of the game.

Besides Madness, all terms on cards follow the same rules as the previous sets. Play until someone has reached 15VP, count up any reductions from Madness card, and determine the winner!

Something I wanted to point out before we get too far into my thoughts on the game is the storage of the game. The Obligatory Cthulhu Set came in a small box similar to Awesome Level 9000, with a cardboard insert for players wanting to keep the sets separate. I enjoy condensing my games down when i can, so AL9K already made its way into the box for the core game. I wanted to note that there is enough space in the core box for all of the original factions and bases, as well as all decks from the last 2 expansions, and the Madness cards. Unfortunately I do not have enough sleeves at the moment, but I wanted to show you that all of the printed Smash Up cards do fit in the core box with ease. I am curious if a new box is going to be made available for expansions beyond Cthulhu in order to fit all sets in one box, but we will see.

Missing some sleeves, but it all fits!

In previous sets, each faction stood on its own and didn’t have a similar theme across them, which caused a bit of a stir in the gaming world. Concern arose that having 4 new factions all focused on the same theme might take away from the game, but in my personal experience, it didn’t. Each faction has its strengths just as the previous factions and can be easily seen as independent forces. Would it have been nice to see more than what came with this set? Perhaps.

In a couple of games, we strictly played with this expansion alone. When I played the Miskatonic Innsmouth team, my personal experience was that The Locals did all the work, while the students of Miskatonic U just provided backup with actions and discarding the copious amounts of Madness I found in my hand. While future faction combos seemed a bit more balanced, facing the Elder Minions of Cthulhu Things (does that work?) was like staring defeat in the face. I put up a good fight, but was drowned out by Madness in the end.

About to get all this Madness out of my hand. Or try to, anyhow.

Pairing the Cthulhu-themed factions with those from the core and AL9K set brought havoc in its best form, and made us forget at times how many Cthulhu set factions were being played, as they worked differently with the other factions. An Elder Wizard Things deck was a monstrosity that was difficult to tame, but beautiful in its own crazy way. I ended up with a Bear Minions of Cthulhu’s Calvary combo that turned out to be very effective. The most notable winner of our all-factions-combined war was the Innsmouth Robots. All of those small-power cards combined to smash nearly every base that dared to come across the table.

As mentioned before, I feel that this set was a success because the factions are different enough to appreciate them separately, though I do like the idea of a “general” expansion title with its factions being a little more independent. As with other sets, The Obligatory Cthulhu Set has high re-playability since the faction combinations vary so greatly. I find that I don’t tire of Smash Up easily, and with new factions being added somewhat regularly, I don’t see that going away.

If you’re already a Smash Up fan, I don’t think you’ll be disappointed. The folks at AEG took a fun approach to the world of Lovecraft’s Cthulhu, and it should be treated as such.  Some die-hard Cthulhu fans may argue that some of the factions don’t operate as they should, but within the limits of the game, I feel that they make sense and blended nicely with the existing mechanics and terms of the core set.

As with the AL9K Set, the expansion can potentially let up to 6 players bring destruction to the table, but I do think that the sweet spot of game balance is 4 players. The set retails for $19.99 and is sure to set the tone for a maddening good time with your victi- err..fellow gamers.