You are reading
To Buy or To Build: The Battlemat

You have purchased your first miniature war game. All the minis have been primed and painted, but what are you going to play on? Is it better to buy a nice battlemat, or to build one to suit your needs?

Recently, we decided to delve into this subject. Having just started playing MERCS, we have been in the market for a battlemat. After hours of research online, only to find out that the ones we wanted were either discontinued or expensive, we decided to look into a more “creative” approach.

What You Will Need:

The bulk of the material should be relatively inexpensive, with the canvas being the largest part. We used a 4’ x 15’ drop cloth, since that will give us enough to make multiple mats. The caulking that we used was DAP® ALEX Fast Dry® Acrylic Latex Caulk Plus Silicone 10.1oz White since it could set and be ready to paint on in about 30 minutes. We picked up two 4 inch putty knives because, as in gaming, it’s always fun to have others join in. The total cost in materials for us was around $35 since we already had a tape measure, Sharpie, trash bags, scissors paint brushes, paint and a table. 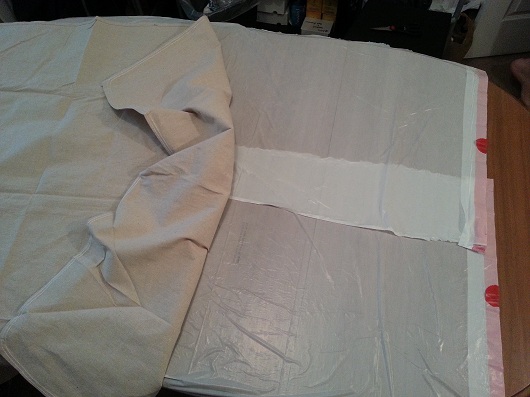 Before we started, we put down some trash bags on the table. We didn’t have any of the caulking come through the canvas, but it doesn’t hurt to be prepared. 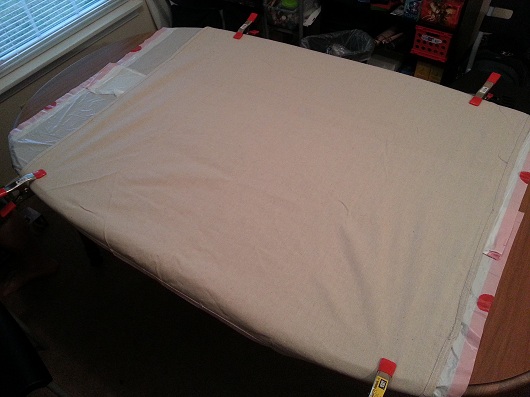 After placing the trash bags down, we clamped the canvas to the table. We stretched out the canvas as much as we could to help get out the wrinkles and to keep the work area as flat as possible. 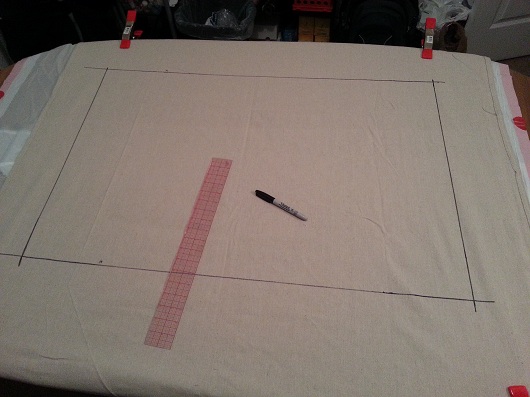 Next, we drew lines to mark the size of our battlemat. The one that we were building is a 2’ x 3’ mat, which is the suggested size for MERCS.

Now it is time to start with the caulking! We started by putting enough on the canvas to make a layer that would cover the area we needed. After that, we let it set for about 30 minutes and did it again. Then, we did a final layer about 30 minutes layer, allowing this one to be more uneven to make variances in the topography.

After the third layer of caulking has been spread out, we started to add the texture. For this, we took a couple plastic grocery bags, crumpled them up and began to mash them in various areas of the mat to help vary the field.

After the terrain has been mangled by the bags, it is time to let it set. We let the mat set for around 45 minutes to an hour so that it was dry enough to start adding the paint

This is a close-up before the paint was added. In this, you can see the texture on the mat.

For the paint, we used a layer of black to simulate a more urban landscape. We covered the whole area of caulking and tried to make sure that no white was showing though it.

The dry-bushing begins! We mixed white and black paint together to make a dark gray color that would help to show off the texture on the battlemat. It was added by brushing a crossing motion to help pick it up from all angles. 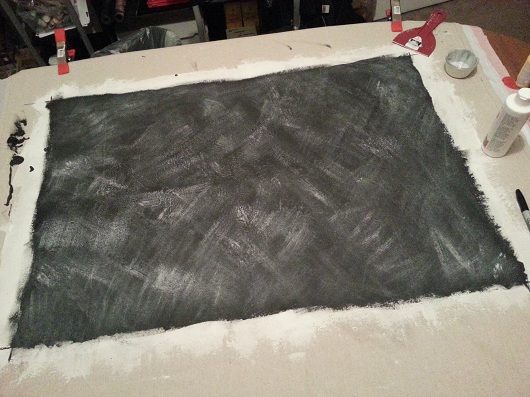 After the first layer of dry-brushing, we added a second layer made with a light gray. This was to help show even more the differences in the terrain. 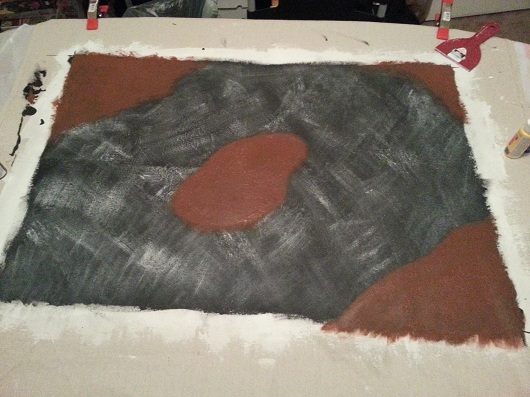 After the dry-brushing was finished, we then added brown in some spots to make dirt patches. To this brown, we dry-brushed on 2 lighter shades as before on the black.

On top of the brown patches, we added green to make grassy areas. As you can see in the picture, we dragged the green and brown out onto the lower colors to simulate dirt on pavement ant grass patterns on dirt. 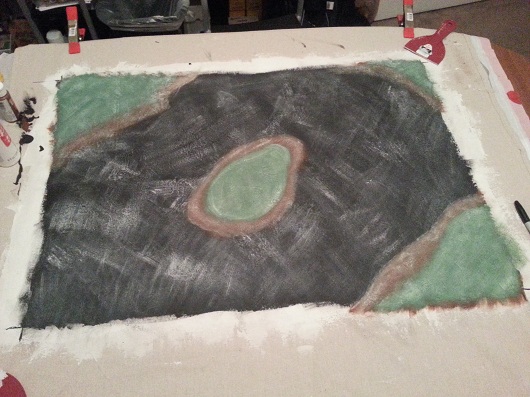 As before with the dirt and the pavement, we proceeded to dry-brush two shades of green onto the grassy areas to help give it a more natural look. After this was done, it was now time to cut the mat out.

This is what the battlemat looked like in its completed glory. After we had cut it out, there were a few places on the edge that need some paint added to it. A little touch-up and we are good to go! 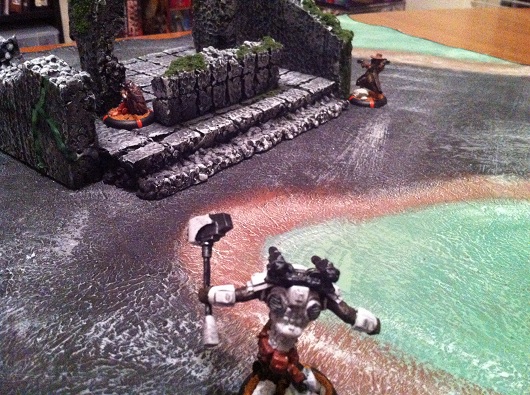 To make our own battlemat, it costs roughly $35. We only had to use two tubes of caulk for a 2’ x 3’ mat. This means that a 4’ x 4’ mat, which is typically used for games like Warmachine and Hordes, would need about 4 tubes. Would I build another battlemat using this method? Most definitely! One of the nice things about this project is that for about the same price for a single mat of this type, you could make 3 to 4 mats of varying sizes. Also, there is a sense of pride when you lay this out on the table to play your favorite miniature war game.

Spartan Games On Board to Produce HALO Miniatures Game with Microsoft