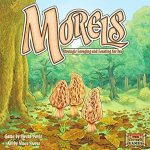 You are reading
Written Review – Morels

Having seen the plentiful harvests of mushrooms brought in to town from The Forest, the hobby of mushroom hunting – and eating!- appeals to you. After your first visit to The Forest, you find some mushrooms, but not enough to make a meal. Returning to town with a small handful, you are able to sell what types you did find to people in town, who give you tips as to where to search in The Forest for more rare and delectable types of fungi. But, they also warn you of the deadliest of mushrooms, the Destroying Angel. Race against your opponent to collect the most MVP’s (Mushroom Varietal Points, of course) before The Forest’s mushroom supply is diminished!

Morels is a game for players age 10 and up, designed by Brent Povis, and was published in 2012.

Contents of the Box

The art for this game is produced by Vince Dorse, and if you are interested in the creative process behind making the art for Morels.

Each player receives a Pan token for their player area. The Day and Night Decks are separated and shuffled, then placed to the side. From the Day Deck, lay out a set of 8 cards face up to create “The Forest”, the area that players will be picking up cards from. Each player then takes 3 cards from the Day Deck as their starting hand, which starts at a limit of 8 cards until Baskets are acquired. Once a player is chosen to go first, the game begins.

The most common card type you will find is, of course, mushrooms. These cards will contain the name of the mushroom at the bottom, and two symbols in the upper left corner. The number below the Pan determines how many MVP’s you will score at the end of the game for cooking this type of mushroom, and how many Foraging Sticks you can acquire by selling it. Think of Foraging Sticks as knowledge gained from the townfolk as to how to find more mushrooms than the average Joe. Mushrooms from the Night Deck match the Mushroom types from the Day Deck, but they are worth 2x the amount of MVP’s and Foraging Sticks when scored/sold.

Players may collect additional pans to cook each set of mushrooms in, and these pans will come up in The Forest. A different pan is required for every set of mushrooms, and playing a pan is an action on its own.

Baskets can also be collected and placed in your player area (they do not enter your hand) to increase your hand limit by 2 cards per basket.

Butter and Cider cards will also make appearances in The Forest, and these give you bonuses to your sets of cooked mushrooms, but must be played at the time that action is played, and with some restrictions. Butter may be used when cooking a set of 4 or more like mushrooms, and the card itself is worth 3 MVP’s. Cider works the same way, but must be played with a set of 5 or more mushrooms.

Moon cards are immediately discarded upon collection, and that player then takes the top card of the Night Deck. As mentioned before, the Night cards are worth twice the mushrooms, MVP’s and Foraging Sticks, but only count as one card. The only two types of mushroom that do not come in the Night Deck are Morels and Destroying Angels.

If a Destroying Angel would be collected with no pans of cooked mushrooms, the mushroom is discarded, but the player’s hand limit still drops to 4 (+2 per basket). Also, a player may not have more than 1 Destroying Angel in their player area, as the toxicity is considered fatal.

Now that you know what the cards do, here’s how you play Morels.

Each player is given a Guide Card which instructs the player as to what Action may be taken on their turn. Only one action is allowed per turn, and the actions are as follows.

A. Take One Card From the Forest – At the opposite end of The Forest from the Night and Day Decks is The Decay, where cards move at the end of each player turn. The two cards closest to The Decay are considered to be easily collectable, and are free to pick up. For every space away from these 2 cards, the cost to pick up that card is 1 Foraging Stick. The third card from The Decay will cost 1 Stick, the fourth will cost 2 Sticks, and so on.

Game in session, with Morels and a Basket up for grabs.

B. Take All Cards From The Decay – Just as it says. The Decay can hold up to 4 cards, and could be a hefty fungus haul.

3 Shiitake mushrooms make a complete cooked set, as does a day Tree Ear and a night Tree Ear, which counts as 2 mushrooms on one card.

D. Sell 2 Or More Like Mushrooms – This is the action one would take to collect Foraging Sticks. At least 2 like mushrooms must be sold at once. Add Foraging Stick tokens equal to the mushrooms’ sell value to your player area.

Keep in mind that cards may only be picked up if they do not cause you to go over your hand limit!

After each player has taken their turn, changes happen in The Forest. The card closest to The Decay is moved into The Decay. Keep in mind that The Decay can only support 4 cards, so if a card were to be placed in The Decay when it already has 4, the existing 4 cards in The Decay are discarded, and it begins again with the new card.

The Forest area is slid down towards The Decay, and is then refilled with cards from the Day Deck for the next player.

If not taken, the Morels will be moved into The Decay. If picked up, then the Basket will enter The Decay.

The game ends when there are no cards remaining in The Forest. At this point, each player counts up their MVP’s from the cooked sets of mushrooms. Any cards in players’ hands are worth nothing, and the same goes for any remaining Foraging Sticks.

More Than I Expected On A Mushroom Hunt

I took on Morels being the mushroom fan that I am, but I still approached with caution. How do you turn foraging for mushrooms into a game, let alone one that would hold gamers’ attention? I set the unknown aside, and dove head first into The Forest to find out how this two-player card game would play out. I am an artist, so the beautiful details on the box and cards immediately grabbed my attention. I linked above to Vince Dorse’s blog posts to the creative process behind bringing the game to life, and would highly recommend checking them out if the art fancies you.

The ever-helpful guide cards, outlining turn order, as well as an inventory of the cards found in the deck

The attention to detail in regards to how many of each card type are in the deck really made the game for me, because I seriously reconsidered my choices, whether it be from The Forest or The Decay. Often times I found a mushroom I wanted, a moon card for those desired multi-mushroom cards, and a Destroying Angel sitting in The Decay. If I didn’t take it, another 2 potential sets of cooked mushrooms disappear from the game, but is it worth it to pick up a Destroying Angel that would affect me for 3 turns? On the other hand, if I decide that the Destroying Angel will cause more harm in the long run, I can leave it for my opponent to pick up, or force The Decay to be discarded, and possibly leaving the other player at a disadvantage as well. The strategic part of this game gets much more intense than I anticipated.

After a few plays, I found that I never kept the same strategy, and I loved changing it up. Only once did I actually try to collect the set of Morels (of which there are only 3), but my opponent picked up the last one, leaving me with the only option to sell them for Foraging Sticks. Another game, I never took cards from the At Your Feet area, and only from The Decay and purchasing from The Forest. I found myself missing opportunities to pick up desired mushrooms because in order to make room in my hand, I’d have to take a turn to sell extra cards in my hand. I enjoyed the challenge of the hand management, though, and is good for teaching new players strategies.

My only complaints about the game are spread among the physical way the game is played, and a possible imbalance within gameplay. As mentioned above, cards are slid on the table towards The Decay at the end of every turn. With frequent sliding, I think that the backs of the cards may become torn up over time if not sleeved. If this is a game that interests you and you’re wanting to pull out frequently, I would recommend sleeving the set for longevity, because the art is worth preserving. The only component I’d add to this game would be a board for the decks, The Forest, and The Decay.

And then, the Night Deck. The cards from the Night Deck are worth twice the mushrooms, sticks, and MVPs, but one could argue that these are too powerful. In my personal experience, I did everything possible to obtain Moon cards for these. More often than not I was able to lay down early sets of cooked mushrooms because of these cards, and the ones I didn’t use were sold for sticks. While it does come down to hand and timing management, I do feel that the more Moon cards a player acquires, the better of an advantage they have. I suppose that players could remove all Moon and Night Deck cards from the game, but it might affect play time.

Either way, I think that Morels has great potential for re-playability, as your approach is likely to change with every game. I think that the target audience range is pretty accurate, too. While it may take a couple turns for younger players to catch on and make use of hand management, it will certainly sharpen those skills.

Overall, Two Lanterns Games made a great two player game that keeps you thinking and constantly changing your strategy to come out on top.  I had more fun with Morels than I anticipated when I first pulled the cellophane off of the box, and turned into a classic case of not judging a game by its cover. Morels retails for $25.00 and is well worth the price. If you are looking to add a re-playable strategy card game to your library, I would direct you towards Morels!