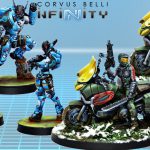 Corvus Belli had a successful time at Gen Con 2013 this year with their new sci-fi miniatures game, Infinity. The game has been creating buzz in the community, and it’s for good reason. Just recently on the Infinity Facebook Page, Corvus Belli has posted photos of all the upcoming miniatures releasing this month.

There’s quite a few sets coming this month, though specific dates weren’t posted. Still, the photos speak a thousand words and each of these models looks glorious. The sets releasing include: Kamael Light Infantry, Shavastii Aswuangs Spitfire, Atlanta, Agema’s NCO, Imperial Agent Pheasant Rank, and the Quapu Khalqi Starter Pack. Of course the models are shown pictured with the many sets of terrain made by different companies specifically for Infinity, which is already enough to make you drool.

Of all the releases, I’m most excited for the Imperial Agent. He looks like he’d fit right in with the faction I play in MERCS, and the paint scheme done by Angel Giraldez is phenomenal. One day I hope to get my painting skill on par with those of Angel’s, but it’ll take some time and patience. With all the support Infinity is getting through different outlets, I see his game picking up here in the states quickly. If you haven’t had the chance to check out Infinity, head over to the game’s official page to do so. For those who have, check out the release photos below.

Facebook Twitter Google+ LinkedIn Pinterest Tumblr
Previous article Final Days for Demon Wars: Reformation on Kickstarter
Next article Where Do I Put All the Bits?! Storage Solutions for Games
Announcement