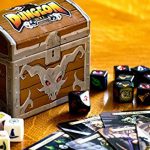 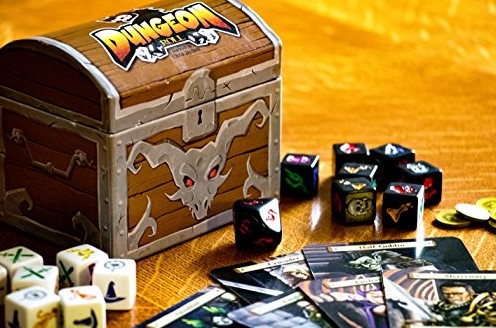 At the heart of every fantasy tale, the action takes place in a dungeon. The heroes bravely fight goblins, skeletons, and even a dragon if it were to show itself. Tasty Minstrel Games wanted to embody this iconic adventure from our favorite fantasy tales and put it into a fun and active game. Through a successful Kickstarter, that game has come to life, and it’s called Dungeon Roll.

In Dungeon Roll, you take the role of a daring hero who is out seeking glory and treasure. You’ll play against other heroes as you all delve into a deep, dark dungeon in search of loot. Each hero does something a little different, which makes each run unique. The player who makes it out of the dungeon with the most XP at the end of the game is the winner!

Now a few people have complained that the components of Dungeon Roll are of low quality, but I beg to differ. The art on each of the hero cards is nice and colorful, even though I agree that the cards are a bit flimsy for my taste. I do think they could have come out stronger. Each card is double-sided, as at different points the hero will level-up into a different, and better, class. The issue here is, while the new class has a different name and the background for the text is different, the art remains the same. I would have liked to see different art for when the heroes level up.

The dice look really nice, and their quality is great. I didn’t have any misprints or damaged colors on any of the dice.  The treasure and XP tokens are great quality too – nice and rigid, and they don’t bend easily. The tokens are colorful and easily distinguishable against the others.

Just for clarification, here’s what you get in the box (retail version):

Dungeon Roll is a simple, yet enjoyable game that can be setup and played quickly. Each player chooses one of the hero cards. Then the XP tokens are laid out on the table, in reach of everyone. The treasure tokens (marked with a gold backing, like a coin) are put back into the box. Conveniently, the box for Dungeon Roll is shaped like a treasure chest, so it gets use in the game, which we’ll cover in a bit. The player who was underground most recently goes first and takes all of the white Party Dice. The player to their left takes all of the black Dungeon Dice. The big d10, which is the Level Die, is set to 1. You’ll need somewhere to the left and right of the Level Die to call the Graveyard and Dragon’s Lair, and then you’re ready to go!

The aim of Dungeon Roll is to have the most experience points once each player has completed 3 dungeon delves. During each delve, you’ll use Party Dice that you roll to defeat monsters, open chests, and quaff potions rolled on the Dungeon Dice. After the monsters are defeated in a level of the dungeon, you’ll have the choice to continue further or return to the tavern. If you continue further, the Dungeon Lord will roll more dice for the dungeon, making your delve more difficult. When you retire to the tavern, you’ll refresh your hero and collect XP equal to the level of the dungeon you just passed. For instance, passing level 4 of the dungeon would get you 4 XP when you retire. If you press forward and are unable to defeat the monsters in the level for whatever reason, your delve immediately ends and you gain no XP.

So what’s in a delve? Each delve is comprised of phases. We’ll look over each one individually, but here’s a breakdown of how a delve plays out from beginning to end:

1.)    The Adventurer rolls all of the Party Dice to form their starting party.

2.)    If it is exhausted, the Adventurer refreshes their hero card.

4.)    The Dungeon Lord rolls 1 Dungeon Die to populate the dungeon.

If at any time the Adventurer cannot defeat all Monsters rolled for the current level of the dungeon, they must retire and will lose all XP for the level.

Next up is the Loot Phase. During this phase the Adventurer may make use of any Chests or Potions rolled. For Chests, one Companion may be used to open a single Chest. Doing so will let the Adventurer draw a treasure token from the box. Champions and Thieves can be used to open any number of Chests rolled in a level. Treasure tokens can be anything from a Town Portal Scroll to a Vorpal Sword that acts as a Fighter for your party.

Potions will allow you to use a Companion in your party to revive another Companion from the Graveyard. A Companion may quaff any number of Potions rolled. For each Potion quaffed the Adventurer takes one Party Die from the Graveyard and adds it to his active party, setting it on any face he wishes.

Any unused Potions or Chests disappear at the end of the level and return to the Dungeon Dice pool.

The Dragon Phase comes next, and it’s full of excitement. At any time during a delve, when a Dragon is rolled on the Dungeon Dice, you immediately add it to the Dragon’s Lair. Once three or more Dragon dice are in the Dragon’s Lair, the Dragon descends upon the party and the Adventurer must defeat it! It is important to note, however, that players do not encounter the Dragon until all Monsters have been defeated in the current level. In order to defeat a Dragon the Adventurer must use any combination of three different Companions. Treasure tokens that act as Companions may be used when defeating the Dragon. If an Adventurer successfully defeats a Dragon, they immediately gain 1 XP and draw a treasure token from the box. If the Adventurer fails, they must immediately flee the dungeon, losing all XP for the level.

Finally we have the Regroup Phase. During this final phase players have two options: retire to the tavern, or push forward to seek more glory. If a player chooses to retire they collect XP equal to the current number on the Level Die and their delve is over. If they decide to press forward, the Level Die is turned to the next number and each phase starts again. If a player ever makes it to Level 10 of the dungeon and passes it, they must retire as the Stuff of Legend! They collect 10 XP and the delve is over.

Play continues through the phases until each player has completed 3 delves. Once this happens, the final scoring takes place. Each player adds up their total XP and then counts their treasure tokens they have left over. Each treasure token is worth 1 XP at the end of the game with 2 exceptions: the Town Portal Scroll is worth 2 XP each as it’s printed on the token, and each pair of Dragon Scales grants you 2 addition XP on top of the 1 they normally provide. As an example: each pair of Dragon Scales is worth 4 XP: 1 from each scale, and 2 extra from having a pair.

The player with the most points at the end of scoring is the winner!

I really like Dungeon Roll. The components are solid, the gameplay is fun, and it is a great game for quick plays. My issues with it, however, were that the rulebook could be a bit more clear, and I did have some issues with the box it all comes in. The rulebook does a great job in explaining the flow of the game, but I feel like there could be some better clarification at some points, namely when it comes to treasure and timing when using scrolls.

With the box packaging, after only a few games the box is already showing wear on its back. It doesn’t look like it will stand the test of time, especially if the game is played on a regular basis. I plan on making a custom box for the game, as I assume many will, so this is a minor setback. But for those who paid on Kickstarter to get the exclusive box, this will no-doubt be a disappointment.

All this doesn’t mean the game isn’t fun, though. Dungeon Roll is a very enjoyable game, and I feel it’s the perfect pick-up game for anyone who enjoys a bit of fantasy play. The dice are sweet, and the heroes are all unique. If you’re looking for something casual and fun, I’d recommend Dungeon Roll. I would warn you of its packaging, however, and the quality of the cards. Just take caution, and you’ll have a great time.