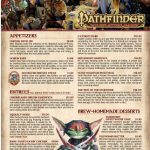 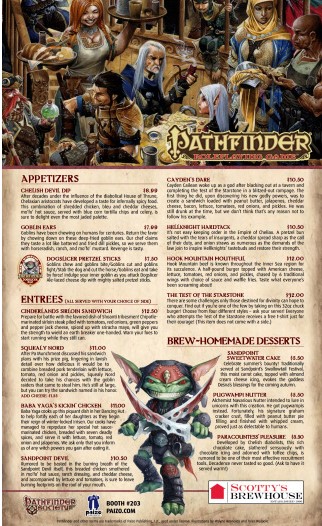 I know it’s a bit hard to read, so I took the time to get the text off the menu in a much more readable format. That being said, here’s what you can look forward to at the Pathfinder Tavern next week:

CHELISH DEVIL CUP               $8.99
After decades under the influence of the diabolical House of Thrune, Chelasian aristocrats have developed a taste for infernally spicy food. This combination of shredded chicken, bleu and cheddar cheeses, mo’fo’ hot sauce, served with blue corn tortilla chips and celery, it’s sure to delight even the most jaded palette.

GOBLIN EARS             $7.99
Goblins have been chewing on humans for centuries. Return the favor by chowing down on these deep-dried goblin ears. Our chef claims they taste a lot like battered and fried dill pickles, so we serve them with horseradish, ranch, and mo’fo’ mustard. Revenge is tasty.

CINDERLANDS SIRLOIN SANDWICH             $12.50
Prepare for battle with the favored dish of Shoanti tribesmen! Chipotle-marinated sirloin steak piled with tomatoes, red onions, green peppers, and pepper jack cheese, spiced up with sriracha mayo, will give you the strength to wield an earth breaker one-handed. Warn your foes to start running while they still can.

SQUEALY NORD                     $11.00
After Pa Munchmeat discussed his sandwich plans with his prize pig, lingering in lavish detail over how delicious it would be to combine breaded pork tenderloin with lettuce, tomato, red onion, and pickles, Squealy Nord decided to take his chances with the goblin raiders that came to steal him. He’s still at large, but you can try the sandwich named in his honor.
ADD CHEESE $1.25

BABA Yaga’s Kickin’ Chicken                        $11.00
Baba Yaga cooks up this piquant dish in her Dancing Hut to help fortify each of her daughters as they begin their reign of winter-locked Irrisen. Our cooks have managed to reproduce her special hot sauce-marinated chicken, breaded with seven deadly spices, and serve it with lettuce, tomato, red onion, and jalapenos. We ask only that you inform us of any witch powers you gain after eating it.

SANDPOINT DEVIL                 $10.50
Rumored to be basted in the burning breath of the Sandpoint Devil itself, this breaded chicken smothered in mo’fo’ hot sauce, ranch dressing, and cheddar cheese, and accompanied by lettuce and tomatoes, is sure to leave burning footprints on the roof of your mouth.

CAYDEN’S DARE                     $10.50
Cayden Callean woke up as a god after blacking out at a tavern and completing the test of the Starstone in a blitzed-out rampage. The first thing he did, upon discovery is new godly powers, was to create a sandwich loaded with peanut butter, jalapenos, cheddar cheese, bacon, lettuce, tomatoes, red onions, and pickles. He was still drunk at the time, but we don’t think that’s any reason not to follow his example.

HELLKNIGHT HARDTACK                   $10.50
It’s not easy keeping order in the Empire of Cheliax. A pretzel bun salted with the tears of insurgents, a cheddar spread sharp as the call of the duty, and onion straws as numerous as the demands of the law join to inspire Hellknights’ tastebuds and restore their strength.

HOOK MOUNTAIN MOUTHFUL                     $12.00
Hook Mountain beef is known throughout the Inner Sea region for its succulence. A half-pound burger topped with American cheese, lettuce, tomatoes, red onions, and pickles, chased by 6 traditional wings with a choice of sauce and waffle fries. Taste what everyone’s been screaming about!

THE TEST OF THE STARSTONE                      $32.00
There are some challenges only those destined for divinity can hope to conquer. Find out if you’re one of the few by taking on this 32oz chuck burger! Choose from four different styles – ask your server! Everyone who attempts the Test of the Starstone receives a free t-shirt just for their courage! (This item does not come with a side.)

PUGWAMPI NUTTER             $5.50
Alchemist Navarious Nutter intended to lure in unicorns with this creation. He got pugwampis instead. Fortunately, his signature graham cracker crust, filled with peanut butter pie filling and finished with whipped cream, proved just as delectable to humans.

PARACOUNTESS’ PLEASURE             $5.50
Developed by Chelish diabolists, this rich chocolate cake, slathered sensuously with chocolate icing and adorned with toffee chips, is rumored to be one of their most effective recruitment tools. Decadence never tasted so good. (Ask to have it served warm!)

I am totally looking forward to trying out that Paracountess’ Pleasure right after a knock back a Hellknight Hardtack. I know I’ll be itching to try out The Test of the Starstone, but don’t know if I can hack it. What do you think? Do you have the strength to devour the beast?