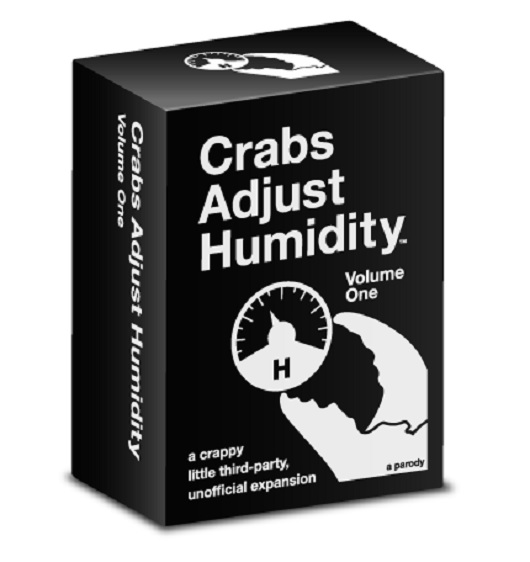 We here at Initiative : Tabletop enjoy a relaxing party game here and there in between our intense gaming sessions, including one that most gamers have at least heard of : Cards Against Humanity. Gaming company Vampire Squid Cards decided to have some fun and make their own (unauthorized, unofficial) expansion to the “offensive card-matching party game” that most gamers are already familiar with, and have named it Crabs Adjust Humidity. Most fans of Cards Against Humanity already know that the game will make you a horrible person if you weren’t already, and this third-party expansion set follows in its footsteps.

Before we move on much further, I’d like to slap a “NSFW” label on this game, though we will try to keep the review itself as PG as possible. Leave your morals at the door, because they will not survive here!

Crabs Adjust Humanity comes packaged in a small deck-box, just like the cover photo. Seeing “Volume One” shows promise that there might be more packs coming in the future. The box does come with a warning that the game is meant for players ages 17+ so that there are no surprises once it hits the table. Inside the box, you will find that the cards don a very similar layout and font to its compatible game, with the text on the back of the cards and logo on the bottom left of the cards bearing their own name. Included are 78 white answer cards, and 30 black question cards.

Picking up Crabs Adjust Humidity, it is assumed that you have the core Cards Against Humanity game to ensure a nice mix of both games. Crabs Adjust Humidity does not come with rules since it is likely that one wouldn’t be interested in it unless they knew how to play its compatible game, but for the sake of a thorough review, we’ll go into the basics. The game is best played with a base of 4 players, but there is really no maximum players for this chaos.

The black cards are shuffled together, and the white cards are shuffled together (don’t forget to mix your new Crabs into these!). Each player draws 10 white (answer) cards and keeps them in their hand. One player is deemed the Card Czar – but we will call them the Crab Czar for this review since it is only right. The Crab Czar will draw one black (question) card, and read it aloud. All players except for the Crab Czar choose one (or more, depending on the question) answer card from their hand, and place it face down in front of the questioner.

Once all answers have been handed in, the Crab Czar shuffles the answers so that no one knows which card is read first, then reads the answers aloud in an answer form to the question. The Czar then decides which answer is best (funniest, most logical, whatever their reasoning is), and the player who played the winning white card takes the black card into their stash as one point. All players draw back up to 10 white cards, and the person to the left of the Crab Czar becomes the new Czar, and play continues.

There are various point values you can play to, though our home group always just plays until we run out of cards, regardless of points.

The cards, both black and white, range in topics from science fiction fandoms, political (in)correctness, absurdities, religion, science, and more. Some are things that simply make you question the sanity of the creators, yet want to high-five them at the same time.

If ridiculous party card games are your thing, or even if you like playing them with a casual group of friends (that aren’t easily offended), Crabs Adjust Humidity should be on your wish-list. Fans of its predecessor won’t be disappointed, as both the questions and answered provided in this expansion are equally as horrible, side-splitting, and appalling. I am very pleased with it, because this little package brought big laughter to our gaming table, and certainly livened up the game. And because I am among the horrible people these games are made for, I would highly recommend this to your (mature?) gaming group for good times.