You are reading
Written Review – Bruges

A flourishing city thrives on economy. Power is derived from wealth. Popularity is build from influence and status. These are the important cinderblocks of Bruges – a board game that is set during the 15th century in one of the most wealthiest cities in Europe. Stefan Feld is at it again, this time with what I’d consider a lighter game than usual, but that in no way means it’s not fun. As one of the games that just wowed me right out of the box, Bruges is a game not to be overlooked. Before the gold gets spent out from under us, let’s take a look at what this Feld creation has to offer, being published through ZMAN Games.

In Bruges, players take the roll of 15th century merchants who must fortify their relationships with the wealthy and powerful in the city. You’ll need to spend your time wisely, as you’ll be competing against one another for power and fame. Players will have the ability to gain influence, recruit people to help them accomplish several tasks, and expand their reach through constructing houses and canals. Beware, however, as shadows fall on the city in different forms, and players will need to watch out for threats that could be very detrimental to their plans for glory. 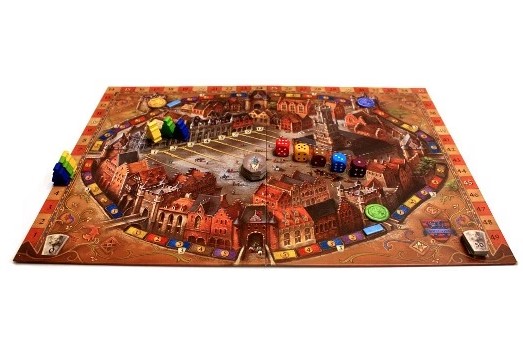 Bruge is packaged in a somewhat medium-sized box and does have a couple handfuls of components. What really shocked me was how it was all put together. You see, I’m a simple man. I enjoy organizing things, and when a game comes to me with a storage solution perfectly placed in its box I feel like throwing a party. Something that ZMAN games has become known for around our office is having great storage solutions in their packaging. Hans Im Gluck is responsible for this, too, and it’s just awesome.

Out of the box, here’s what you’ll find:

That’s a lot of stuff to pack into a box. Luckily, ZMAN has included little plastic bags to keep all of the components in, but that’s not the best part. During gameplay, which we’ll get into next, players will collectively draw cards from two separate piles on the table. Each card is denoted by a different color, so seeing any cards below the one on top of either deck will provide a slight upper-hand to the player that sees them. Since the draw decks sit on the table, with players taking from them on their turns the cards could get disheveled, which would mean that the colors would be seen. In order to help prevent this, Hans Im Gluck started including special card holders that help keep the draw piles organized.

The card holder for the German version of the game. The English looks the same, only with a name change.

I was extremely happy seeing this. I mean, the card holders are only made out of thin card stock, but they work perfectly to make sure the draw piles don’t end up all over the table. On top of this, there’s a big foldable divider to help separate all the components when placed in the box. This was a big plus for me.

The components are all sturdy, and though the dice included in the game are made from a light wood, they rolled well and added plenty of color to the game. The game board is smaller than I’d imagined, but it is double-sided with wonderful artwork, as are each of the game’s cards. Bruges is just a beautiful game to look at.

Gameplay in Bruges progresses through rounds, which are made up of phases. The goal of the game is to have the most victory points at the end once you have scored everything. You can gain victory points in various ways, such as advancing on the board’s influence track, building canal sections, earning majority, and more. We’ll go into each one of those ways as they come up in gameplay.

During each round, play goes forward through a series of phases, in which each player acts. Here’s a summary of the phases in each round:

Now we’ll go over each phase in detail, just to get the hang of how you merchants will exact your influence throughout the city.

During this phase, starting with the start player, each player draws from either of the two draw piles until they reach their full hand of 5 cards. Players can choose from either deck, which is important as each card has a different color, representing the type of workers, house, and person it represents. There are a total of five colors: purple, blue (aqua), gold (yellow), brown, and red. Because of this reason, you should only be able to see the top card of each deck, and that’s why the card holders were included in the game. Once each player has drawn back up to their full hand, play proceeds to the next phase.

Phase 2 – Roll Dice and Advance on the Influence Track

The start player takes all of the dice (one matching each color of card) and rolls them. He then places them on the board in ascending order. Each die that comes up as a 5 or 6 gives players a threat marker matching its color. Threat markers represent the different bad things that can happen throughout the city:

Once a player obtains three markers of the same color threat, their consequences take place and then the markers are removed. Players do have a chance to remove markers themselves, however, which we will get to in a bit.

At this point players may move their pawn forward in the influence track, which will award them victory points at the end of the game. Moving forward costs guilders equal to the sum of all dice rolled showing a 1 or 2. Example: of the dice rolled, 2 dice show a 1 and 1 die shows a 2. This means it would cost 4 guilders to advance one space forward in the influence track this round. Players may only move once per round. If no dice show a 1 or 2 then players may not advance this round.

This phase is where the thick of the game takes place. Starting with the start player, each player plays a card from their hand and takes an action. These actions are:

Players will play cards from their hand and take actions until each player has played four cards. This will leave one card in their hand, which is taken into the next round.

During this phase, players will determine who, if any, has the majority in three different categories:  people, influence, and canals built. If a single player is ahead farther than every other player in any of these categories, they turn their corresponding majority marker over to its colored side. This marker is worth 4 victory points at the end of the game. Once flipped, majority markers don’t flip back down. Once this is finished, the start player marker moves clockwise to the next player and phase 1 begins again.

Once either of the draw piles is depleted, players will replace it with the extra draw pile created at the beginning of the game. This signals the final round of the game. Play continues like normal, though there will be no more rounds after the current one. Once all players have played their four cards, final scoring begins. 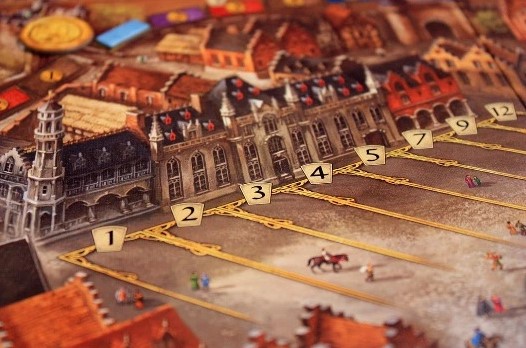 When you score at the end of the game, the following is what you take into account:

Once you’ve scored your victory points, the player with the most wins and is the most powerful merchant in Bruges!

Bruges is one of the best games I’ve played this year by far. I’ve not played a ton of Stefan Feld games, but I’d venture to say this is his greatest release thus far. It’s a game that doesn’t take a long time to play, and setup is rather fast. It’s easy enough to teach new people how to play, and you’ll be having fun in no time. I really like the way people cards work, and there’s a lot of strategy that can be put forth to come out on top. Depending on how you play, you could end up having one card that wins you the game, while ignoring everything else that’s happening on the board. No two games play out exactly the same, like with some other strategy games where one strategy works each time.

The only issue I found with Bruges is that, while it comes with a lot of components, we found ourselves running out of workers, and having to substitute other things in their place. Of course this may not be a problem with less than four players, but this game really excels at 4. Maybe ZMAN will offer up some additional component packs that we could buy? Even if not, there are ways around this issue, so it’s not too big.

Bruges is a great game, and it’s perfect for any Euro fan. I know I’ll be heading back to the 15th century very soon, and I might not think about leaving!

This is definitely worth picking up!

Thanks to ZMAN Games for providing a review copy of Bruges!