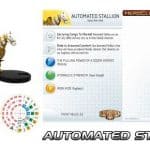 I’m sure I’ve said this somewhere before, but when it comes to HeroClix I’m quite selective. HeroClix is a miniatures game where players use special miniatures that have combat dials on them to do battle against one another for supremacy. There are tons of different HeroClix lines out there, ranging from comic book heroes to Lord of the Rings. The variety is really nice, but I find myself only collecting those I am fond of, so a lot of the different Clix get left out for me. That’s why I got really excited when I first heard that WizKids would be releasing a HeroClix line based off of the BioShock Infinite video game. I’m into things like that, and I have a lot of the Gears of War Clix in my collection.

Though I played through the video game and was a bit disappointed, I still held my excitement for the HeroClix line as it would provide a different experience for me. I was lucky enough to pick up a BioShock Infinite HeroClix Starter from WizKids, and I finally got to put the miniatures to the test. I decided I’d review the bit of the set I received, and talk about each figure individually before going over the set as a whole.

The BioShock Infinite Start Set comes with 6 figures, just like the Starter Sets for each of the other editions. In the set you get these figures (their point values are in parentheses):

I’m not too sure why this selection was chosen for the Starter Set, but we’ll get to that in a bit. Looking at the figures, I have to say that I am impressed with their sculpts. They’re more detailed than I’ve seen previous editions, and when it comes to their paints they’ve been detailed much better. Specifically, and this is something that’s bothered me for a while, each figure’s eyes are painted correctly. They aren’t looking off in any weird directions, though my Elizabeth looks surprised all the time. It may just be me griping, but I do care about the way the figures look to an extent. If they are modeled after something (which they all are), I want the sculpts to resemble that something to the best of its ability.

As far as issues with the presentation of the Start Set, I only found myself with two. First of all, I don’t really understand why WizKids gave Booker the machine gun, when in most of his imagery he’s packing a shotgun. It seems to me they’d make his sculpt more in his likeness from the game. Still, the figure is nice aside from this. Secondly, I really don’t understand why WizKids would include the Automated Stallion in the Starter Set. As you’ll see later, it does have some awesome powers, but is in no way a pivotal character in the game. In fact, you barely come into contact with the Stallion at all in the video game. It seems to me like it would make more sense to add in either a Motorized Patriot or a Vox Populi unit instead. The sculpt for the Stallion is great, but I would have liked to see something more prevalent.

In this section I’ll go over each figure’s powers and stats. Of course a lot of this was shown already in the WizKids preview, but I thought I’d talk about the abilities a bit to offer an opinion on them. With that said, let’s get right to it! 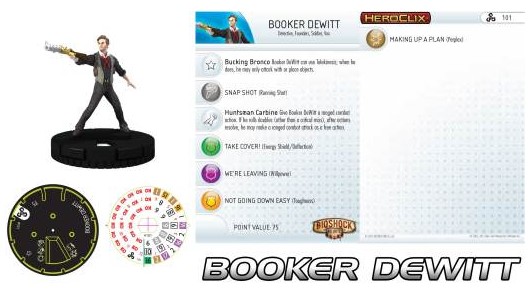 Booker DeWitt hits the board for 75 points. He’s got a trait called Bucking Bronco, and it allows him to use Telekinesis, though he can only attack with or place objects while using it. Even with the restriction, this is a great power if you know how to use it. On his starting click Booker gains a power called Huntsman Carbine, which allows him to make a ranged combat action, and if he rolls doubles, after actions resolve he may make a ranged combat attack as a free action. This is great if you’re trying to pick off  a pesky enemy on your opponent’s team. He picks up Toughness on his second click, as well as Running Shot. He finally winds down with Willpower and Perplex, making him a well-rounded figure to have on your team. His keywords are Detective, Founders, Soldier, and Vox, and he holds a range of up to 5 squares. That’s not too shabby.

Coming in next is Booker’s fateful companion. Elizabeth comes in at 75 points as well, and packs a special trait called Pieces of Another World, which allows her to use Barrier, and when she does, each time she places a terrain marker she may place a hindering terrain marker instead of a blocking terrain marker. This comes in handy when you’re trying to stop enemies from reaching friendly units, especially when they’re on the move. She starts her dial off with Telekinesis, but unlike Booker she can use this power to actually move other figures. She can get Booker into position to take shots when needed, which is extremely useful. Once she leaves her first click she picks up Phasing, and a special power called Ready to Open the Tear! This power allows her to use Telekinesis to move other characters and give them an action token. In addition to this she picks up Pulse Wave, Support, and Outwit, making her a very valuable support character to have on your team. Her keywords are Founders, Herald, and Vox. She has a range value of 8 squares. 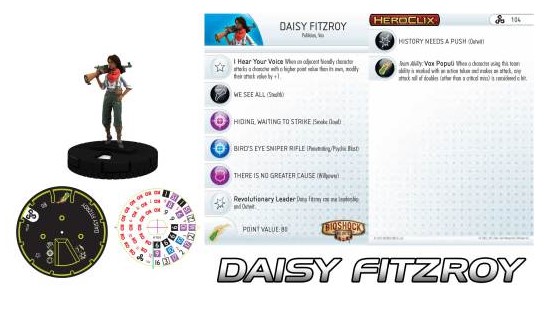 Rounding out the Vox keyword, Daisy Fitzroy comes in next. She runs 80 points, so she carries a bit more weight than our previous characters. Daisy has a unique power set, as nearly all of her clicks include Stealth. Her trait, I Hear Your Voice, pumps up friendly attacking units when they make attacks against a character with a higher point value than its own. She also grabs Smoke Cloud, Penetrating/Psychic Blast, Willpower, and can use both Leadership and Outwit. What makes Daisy special, however, is her Team Ability: Vox Populi. It says, when a character using this team ability is marked with an action token and makes an attack, any attack roll of doubles automatically hits (aside from a critical miss). Add this to Booker’s Huntsman Carbine and you’ve got a dangerous duo on your hands. She brings a range of 7 squares, and holds the keywords Politician and Vox.

Shifting gears a bit (literally), we’ll take a look at some of the tougher adversaries in the game. Starting out is what some would call the equivalent to the Big Daddy in previous BioShock games – the Handyman. This guy packs a punch, and rings in at 150 points all by himself.  Handyman’s trait, Thrown into Action, allows him to use Super Strength, and when he has no action tokens he can use Telekinesis as a free action, but may only place an adjacent friendly character. He also gets a special power called Clearing the Decks, allowing him to use Charge and Leap/Climb. When he uses Charge, after all actions resolve, he can then use Force Blast as a free action. This guy hits hard, and I found out the hard way. Later on through his dial, Handyman picks up Plasticity, Quake, Invulnerability, Toughness, and Combat Reflexes. He boasts the Team Ability Founders, which states, at the beginning of your turn you choose a single opposing character within line of fire of any one character that can use this team ability; all characters using this team ability add +1 to their attack value when attacking the chosen target this turn. Handyman’s keywords are Armor, Brute, Founders, Monster, and Robot.

The Founders wouldn’t be complete without a ranged attacker, and that’s where Flakman shines. This guy can vault explosives at you from 5 squares away with Ranged Combat Expert, making him a most-annoying character. He starts off with Toughness and Energy Explosion, so he should be one of your first targets to get off the map. It’s almost bothersome that this guy costs 45 points, as a whole team of them is certainly dangerous. He carries the Armor and Founders keywords.

Finally we come to the Automated Stallion. Although I’m not sure why, thematically, they would add this figure to the Starter Set, it somewhat makes sense when it comes to its powers.  This character has a point cost of 50, and it’s a great teammate for the Handyman. The Stallion’s trait, Carrying Cargo to Market, allows it to use the Carry ability and carry up to three friendly characters. That’s nearly insane. It also has a special power called Ride in Armored Comfort that lets the Stallion use a free action to give an adjacent friendly character Toughness until your next turn. Use the Stallion to carry in your hardest-working characters and then buff them up with Toughness to make a nearly impenetrable wall for your opponents. Later on the Stallion gets Plasticity, Super Strength, and sees Toughness all throughout its dial.

When it comes to a HeroClix Starter Set you can’t really look at the figures individually, as it’s more about the sum of its parts. Altogether, the BioShock Infinite HeroClix Starter Set has a great range of characters with unique powers, traits, and keywords. I do believe the spirit of BioShock Infinite was brought to life with this set, even though I don’t feel like the Armored Stallion needs to be included, and would have substituted something else in for it. Either way, you can build two different 300-point teams with the set, allowing two players to recreate epic battles in the city of Columbia. I am looking forward to seeing more figures release in the set, and I can’t wait to get the sweet Booker and Elizabeth double figure as soon as I can.

These Clix really bring some fight to the game that, I feel, makes it a bit more frantic. I like the fast-paced combat it introduces, and I like the ability to relive some of the great battles I played through in Columbia. If you’re a fan of either HeroClix or BioShock Infinite, do yourself a favor and pick this up.