You are reading
Written Review – Guildhall 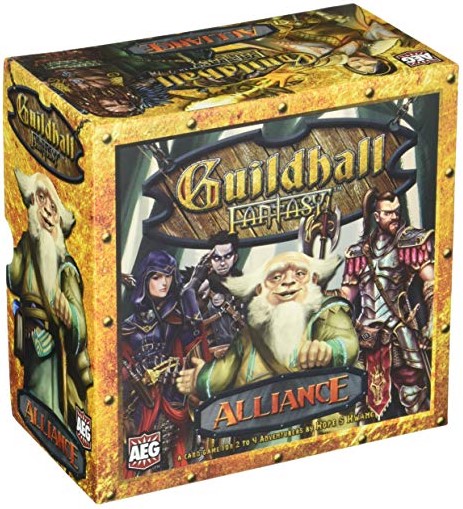 Guild – A medieval association of craftsmen or merchants, often having considerable power.

What’s deadlier than a lone assassin? A group of assassins working together. And the more assassins you have, the more powerful each one becomes. This is true of any profession and why groups of tradesmen banded together in the medieval era to form guilds. This is the premise for the game Guildhall by Alderac Entertainment Group (AEG).

Guildhall is a set-collecting card game for 2-4 players. In Guildhall, players are trying to collect complete sets of each of the six professions (Assassin, Dancer, Farmer, Historian, Trader, Weaver) in order to earn victory points. The first player to have 20 points on their turn is the winner of the game.

In Guildhall, each player has a handful of cards. Each card has two traits, a color and a profession. On their turn a player may take two of three possible actions:

2. Discard any number of cards and draw up to the hand limit of six cards. 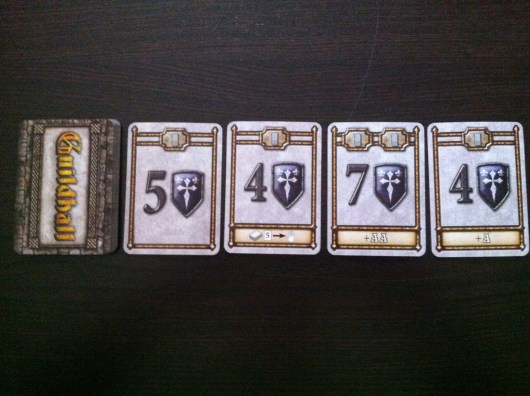 The ‘buy’ row of Victory point cards. First player to 20 points on their turn is the winner!

After a player has taken their two actions any profession cards that were played are moved to their respective sets in the player’s Guildhall area. If this completes a set of the profession (having one of each of the five colors available) the player immediately flips this set over and can use it to buy victory points in a future turn. After a set completes it can no longer be affected by any player actions and the chapter does not contribute to the resolution of a profession card’s abilities.

The key to Guildhall is to understand each of the six professions and their abilities and how to use them to effectively complete sets.

Each profession has a unique ability:

Assassin: Assassins kill (remove) professions from other players Guildhalls. This allows you to prevent other players from completing sets.

Dancer: Dancers allow you to draw cards and take an additional action which is important since this is the only way to draw cards aside from the discard action.

Historian: Historians allow you to take cards from the discard pile and place them directly in your Guildhall.

Trader: Traders allow you to trade profession between your Guildhall and an opponents.

Weaver: Weavers let you place cards directly into your Guildhall without putting them in your play area which completes sets faster. 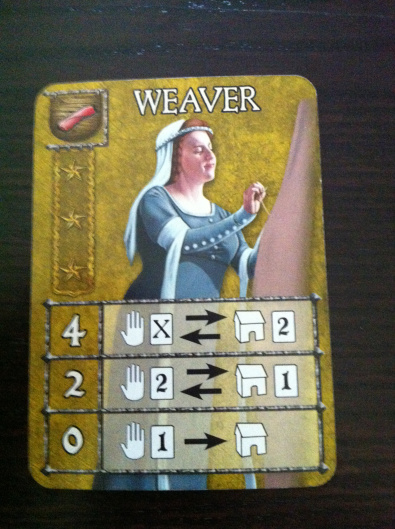 The yellow Weaver. Note the numbers on the left hand side. These represent the number of Weavers currently in your Guildhall. The more Weavers you have the more powerful the Weaver action when played.

One of the most interesting and fun things about Guildhall is figuring out combinations of professions you can play that will allow you to complete multiple sets in a turn. Will you trade for more weavers for your first action and then play a weaver taking advantage of the fact that you have now made the weaver’s action more powerful? Will you assassinate that player’s Dancer and then play  your   Historian to pick her up and add her to your Guildhall? There are many possible combination of actions and this makes each turn different from the last.

Guildhall is a very interactive game and tends to be a more tactical than strategic game. What you will do on your turn is not just decided by the cards in your hand but by what the other players have recently done as well. It’s hard to create a long-term strategy when the first player assassinated two of your professions and the second player just traded for two professions out of your other nearly completed chapter. However, this tactical focus works to the game’s advantage. There is very little downtime in Guildhall as you need to constantly check your opponents Guildhalls to see what sets they are trying to complete and if they have a card you may need to complete sets in your own Guildhall. So even when it’s not your turn you have a reason to closely pay attention to what’s going on in the game. 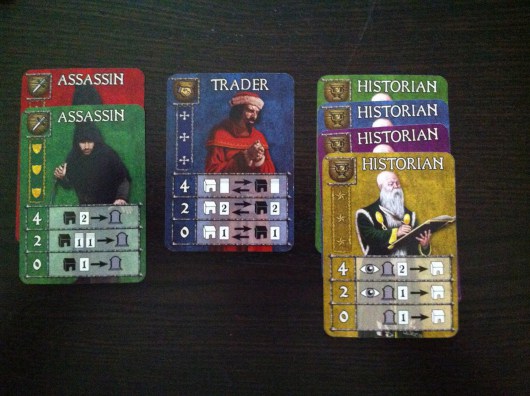 This player has almost completed a set of the Historians in their Guildhall. They are also working on an Assassin set and have just started a Trader set. They better complete the Historian set before the other players notice….

Guildhall is a 2-4 player game and we found it best with three players. It’s still fun with any number but we found the 2 player game very cutthroat and the 4 player game played just a little longer than we would have preferred, likely due to the fact that you need to keep tabs on 3 other Guildhalls as opposed to 2. It’s possible if you played this with a regular group that the 4 player game would speed up as we found that repeated plays improved the time required for the game.

The cards are well-constructed with vivid colors and clear iconography. The victory point tokens used by the farmer role are solid. The only complaint would be the box is overly large for the components of the game and the box insert seems like it was made for a different game.

Light. This  game can be taught to experienced gamers in just a few hands of play and is easy to teach to non-gamers as well.  This is a very accessible game, while still offering enough depth to make playing it fun and challenging.

Excellent. Because the cards are always distributed randomly each game of Guildhall will play out differently. There’s also a lot of fun to be had trying to figure out different ways to use and combine the abilities of the cards to allow you to complete sets more efficiently.

Guildhall  is a fun and well-designed card game that strikes an excellent balance between accessibility and depth. It offers meaningful choices every turn and keeps players involved throughout the game. There is somewhat of a ‘take that!’ element to the game due to the assassin and trader professions but this is mitigated by the fact that every player is going to use those professions during the game. Overall, Guildhall is an excellent ‘light’ game and is highly recommended.