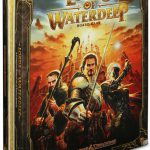 You are reading
Written Review – Lords of Waterdeep 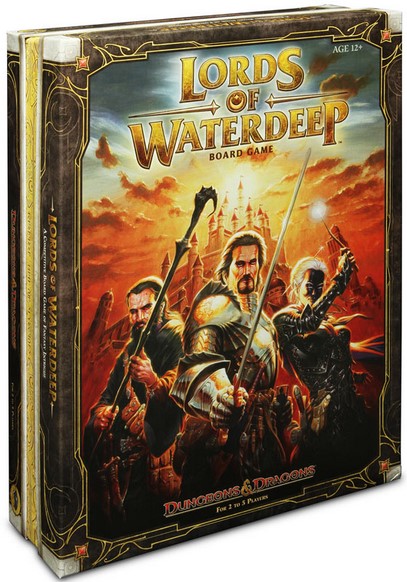 I have never been a big player of Euro-games, but there is one that caught my attention and I quickly labeled as one of my top 10 games. That game is Lords of Waterdeep, a board game from Wizards of the Coast in which you take on the role of a Lord trying to spread their influence across Waterdeep.  Collecting help from adventurers to advance your quests, Lords of Waterdeep is a strategic game of resource management and placement in order to come out on top. Set in the Dungeons and Dragons’ legendary city of Waterdeep, let’s see what this game has to offer.

Upon opening the box, you will find a large assortment of pieces inside. I am particularly appreciative for the storage tray insert, which makes managing all these pieces pretty easy, not to mention that the rulebook has a diagram for where everything goes. You will find the game board, a rulebook, and 5 player mats. There are 100 adventurer cubes, including 25 each of Clerics (white), Fighters (orange), Rogues (black), and Wizards (purple). Wooden pieces include 5 score markers, 25 Agents (5 of each color), 1 Ambassador, 1 Lieutenant, and a First Player marker. Cards included are 11 Lord cards, 50 Intrigue cards, and 60 Quest cards. Lastly, the chit boards include 24 building tiles, 45 building control markers (indicating who owns the building), 60 gold tokens, 36 victory point tokens, and 5 100 VP tokens.

I know that the contents make the game seem a bit overwhelming, but once set up, the game is rather straightforward.

Each player must choose the Agent color to represent their efforts. Choices are Knights of the Shield (yellow), City Guard (black), Silverstars (blue), Harpers (green), and Red Sashes (red). The number of players then determine how many Agents each player starts the game with. Two players gives 4 agents to each player, 3 players get 3 agents, and both 4 and 5 player games get 2 agents. One more Agent than their starting number is placed on the Round 5 Space at the bottom of the board, gaining each player more Agents towards the end of the game. The two neutral Agents (Ambassador and Lieutenant) are gained through various game effects.

Next, the wooden score markers are placed at the “0” mark on the victory point track along the outside of the board. Players take the player mat according to the color of their Agents. Usable Agents are kept in the Agent pool located at the top of the card, The Tavern is where completed Quests are placed face down, and gold and adventurer cubes obtained are placed in the center of the mat in your supply. The square gold pieces are worth 1 Gold each, and the half-moon pieces are worth 5 Gold each.

Lastly, the Lord cards are shuffled and each player is dealt one card at random and upside down. These cards will tell you your objective in the game and are to be kept secret. The Lord you play will determine what kind of quests you will be trying to complete, which are worth Victory Points at the end of the game.

If at any time a player would draw a card from an empty pile, all discarded cards are shuffled to form a new deck.

The player who has most recently been outside of the city gets the First Player marker. The starting player gets 4 gold, the player to their left gets 5, and so on, adding one gold than the person to their right until everyone has their starting gold.

At the beginning of the round, remove the 3VP tokens from the round space you are about to start, and place one on each building in Builder’s Hall. Some buildings that have been purchased have “Start Of Round” effects, so take care of these now. Starting player places their Agent first, and it goes around the table until all Agents have been placed. In Round 5, in addition to the Building VP placement, each player gains their extra Agent to their Agent Pool.

Players may place their Agents in any vacant space on the board, including purchased buildings. Some locations allow multiple Agents to be in the same location, but with various rewards. If the Green player purchased a building, and a Red player places an agent on their building, the Red player gets the reward indicated on the building, but the Green player also reaps some benefits as the owner of the building. If you have Agents, you may not pass on your turn, as they must be placed. If a player has collected enough resources to complete a quest, they must do so after assigning an Agent during their turn.

If an Agent is placed in Builder’s Hall, that player may pay the cost for a building here to claim it and place it in a building location along the outside of the board. Any Victory Points associated with that building are immediately scored.

Waterdeep Harbor is another location in which multiple players can be. This location is used to play Intrigue cards, which can be an Attack, Utility, or giving a Mandatory Quest to another player. These are Quests that must be completed before any other Quests can be turned in. Once all Agents have been played, any Agents in the Harbor must be re-assigned elsewhere for the round to end, starting with the player in the first action space here. They cannot be re-assigned to Waterdeep Harbor.

Quest cards will indicate the resources needed to complete them whether it be Adventurer cubes and/or Gold. Once these have been turned in, they are placed face-down in the Tavern (unless they are Plot Quests, which have ongoing effects in the game), and collect the rewards indicated by the Quest. Only one Quest can be completed per turn, and their rewards are only collected once at the time of Quest completion.

The round finishes when all Agents have been assigned. All players return their Agents to their mats and the player in possession of the First Player marker begins the next round. The game ends when 8 rounds have been completed, and then the final scoring begins. Each adventurer in your tavern gains you 1 VP, for every 2 gold in your tavern, earn 1 vp, and the Lord cards VP’s are scored according to their specified effects. The player with the most VP wins, and in case of a tie, the player with the most gold wins!

I feel that Lords of Waterdeep is a fantastic game of strategy that makes me take a different approach every time I play. I agree with the remarks of many players that say that Larissa Neathal’s scoring condition can be a bit unfair (6VP for every building controlled, vastly different than the objectives of the other Lords). However, a house rule can be fashioned to exclude her from being a playable option. I have never disliked a gaming session that included this game, and I believe would be a great way to catch the attention of new gamers. Beautiful art and excellent game play makes this one of our favorites, and I would highly encourage any player to try this out if you haven’t already.