You are reading
Written Review – Zombicide 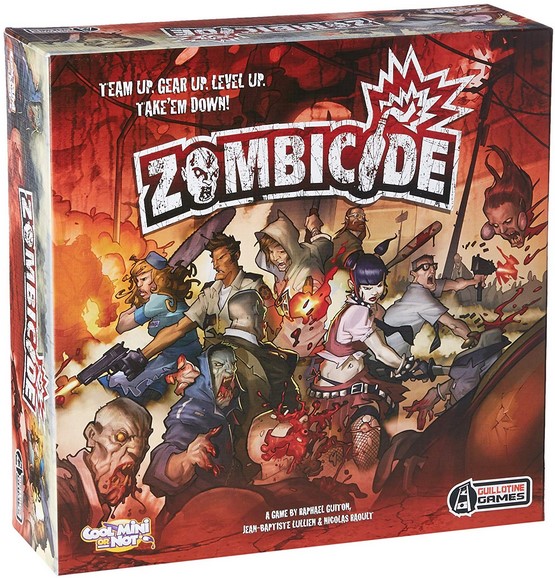 I know what you’re thinking: “ANOTHER zombie survivor board game? Really?!”  My answer: “No, this is THE zombie survivor game.” To paraphrase King Leonidas, “This is Zombicide!”

Zombicide is a cooperative game for 2 to 6 players that began its global domination as a Kickstarter campaign. Each player takes on the role of one of several unique, but familiar characters each with their own special abilities.

Your city has been consumed by the zombie plague. You survived and you plan to for a long time to come. There are about ten pre-made missions to run through in Zombicide, each more like a chapter in the book of zompocalypse survival. From getting food supplies, to building your arsenal to simply getting someplace safe, each mission has different goals and challenges. To carry out those missions, the players must travel through a cityscape made up of double-sided tiles with some great art and tricky mechanical challenges that will test the problem-solving portion of your brain.

Each turn, a player gets to take a limited number of actions, including moving, attacking, searching or breaking down doors; this number increases as the game continues. Each character is made even more unique as they “level up,” earning new abilities to help themselves and the group. This leveling results from both achieving goals and, of course, killin’ zombies. It’s up to the players to cooperatively decide the best use of those actions and the special abilities of each character.

You have to explore your environment in order to achieve your goals and get through the cityscape. Each round the zombie population increases automatically, spawning at certain areas of the game board. So just avoid those areas, right? Wrong! That would be too easy. You’re in a city. Cities have buildings. People live in buildings. People become zombies. See where I’m going here? Each time you kick in a door it’s like unwrapping a really unpleasant present because as the door flies off its hinges, you get to see just how many zombies you’ve revealed in that ENTIRE building. Here’s the best part: as each player kills more zombies, the game spawns more zombies! Yep, the game is as hard as your group’s most effective killer makes it!

Oh, and did I mention that most methods of opening those doors make noise and attract even more zombies to your location? No? I forgot that. My mistake. But wait! It gets even better. Players act as a noise counter themselves. Those zombies don’t like it when we breathe and they listen hard for that stuff. So…hold your breath?

We still need to kill those darned zombies, don’t we? When you use the explore action inside buildings you can find all sorts of fun ways to end their undead lives; pistols, rifles, machetes, chainsaws and even Molotov cocktails. Each weapon is rated with a different number of dice to roll and a success threshold to score a hit. Should you wade into a group of those bastards and saw them in half? Sure, but it’s risky. They may each only get one attack but there are a lot of them. Shoot them from a few zones away? Sure, but make sure your friends aren’t in the area. You wouldn’t want to accidentally hit one of them with an errant shot!

Should you keep the group together or separate in order to more efficiently achieve the mission goals? If you separate, you can strategize to draw the zombie hordes away from mission objectives. But then, can you think of a game where it’s not dangerous to split the party? Uh-huh, me neither. That’s merely one of the panic-inducing choices you and your party will have to make in Zombicide.

The noise counter and the increasing spawn mechanics are, for me, the heart of Zombicide and what really sets it apart from other zombie games. In most zombie games, the more walkers you kill the better. But in Zombicide that just means that more of them spawn. It’s self-defeating in that way, so you can’t simply waste every zombie you see. You HAVE to be smart and avoid some of them, strategize to distract them and make incredibly efficient use of what few resources you do have. I’m sure there are people out there who think that only video games can feel tense and make you nervous. I challenge those folks to play Zombicide.