You are reading
Written Review – Ascension : Rise of Vigil 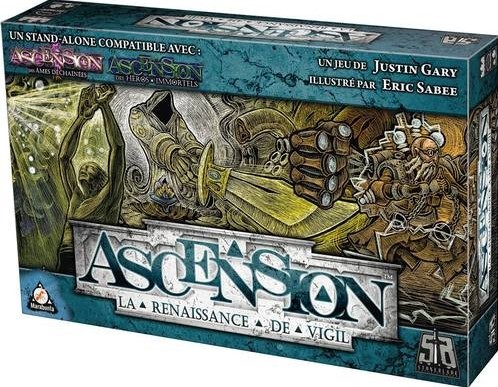 There are a lot of deck-building games out there, and they seem to be growing in popularity. One of my personal favorites, the Ascension series, has kept up with the times with its unique art and story. Using multiple resources, there are many tactics that players can put into action to ascend as the victor of their games. Stoneblade Entertainment has brought us the most recent expansion – Ascension : Rise of Vigil.

Released in 2013, this game is playable as a stand-alone game, but can be combined with other sets to increase the number of players. Ascension games are playable with 2-4 people, and last approximately 30 minutes. With a new resource entering the playing field, Rise of Vigil challenges even the most experienced Ascension fan to change up their game plan and embrace a new source of power.

Rise of Vigil does not fail in the visual department, bringing the same art style of Eric Sabee back to the game table. A new board for organizing the center row and obtainable resources sets the stage for the new playing field, as well as a thorough rulebook. The cards for the main deck include Monsters, Trophy Monsters, and of course, Heroes and Constructs of the Enlightened, Lifebound, Void, and Mechana. The only card that looks to have not gotten an update in appearance is The Cultist. The new cards included in Rise of Vigil is treasure cards which come in the form of Energy Shards. Some of the cards that will make their way into the center row have a new Energize ability, which we will discuss in the next section.

In Rise of Vigil, each player starts out with 11 cards in their opening deck, one more than its previous games. This opening deck includes 8 Apprentices, 2 Militia, and 1 Energy Shard. The Cultist, Mystic, and Heavy Infantry cards are placed in their respectively marked places on the right side of the board. The honor pool should be filled with 30 honor point tokens (clear pieces are worth 1, red pieces are worth 5) per player, so a 2 player game will have 60, 3 players will have 90, and 4 players will have 120. The remaining cards are shuffled into the main deck, and cards are drawn from this deck to fill the center row.

At the start of the first player’s turn, their deck is shuffled, and that player draws 5 cards from their deck. They may use these cards to defeat monsters, obtain better cards such as Mystics and Heavy Infantry, or gain Heroes and Constructs. Early in the game, players are likely to be defeating the Cultist for a quick honor point, or building their strength. When a player obtains a card from the center row, that card is placed immediately into their discard pile (unless it is a Monster and it goes to the Void). That card is then immediately replaced with a new card from the main deck. All cards used this turn are discarded, the turn passes, and 5 new cards are drawn.

The discard pile is shuffled and a new deck is formed when there are no more cards to draw from. These turns continue until the honor pool has been completely drained. At the end of the game, the numbers in the star at the bottom left of each card in a player’s possession are added up. This number is added to the honor points acquired to give a final score, and the player with the most points wins the game.

Now, that brings us to the new treasure cards and their role in the main deck. What happens if you draw an Energy Shard? These cards do not have a cost, so they have a special rule. This card is placed in the center row, and the next card is revealed and placed on top. This repeats until a non-Energy Shard card is drawn. This makes the potential for picking up several Energy Shard cards at once likely, and if your strategy involves a lot of Energy, it is a great route to travel. Energy Shard cards give you +1 to your energy pool, and allow you to draw 1 card.

So what exactly are these Energy Shards for? Some of the Monsters, Heroes, and Constructs that come in Rise of Vigil now have a new ability at the bottom of the card called Energize. These abilities go off if the player has acquired X Energy this turn when defeating a monster, or X Energy when the card is played from their hand. These abilities range from being able to pick up high-cost cards with a lower number of Energy points, or lowering the cost of other cards. Used the right way, Energy can make or break a player. If a player picks up a lot of cards with Energize, but those cards require 3+ Energy but are only able to generate up to 2 per hand, it can be a seemingly useless resource. This is where the picking and choosing of your strategy is important.

The rulebook states that Energy is not a resource that is used up, which can work to a player’s advantage. For example, if you have a total of 3 gained Energy on a turn, and 2 identical cards with an Energize : 3 ability, both of these cards’ Energize abilities will go off. The Energy Shards essentially boost your resources with the ability to draw cards and potentially draw into more Energy, but make the standard cards Ascension fans are used to even more powerful.

I feel that Stoneblade Entertainment came through with this most recent Ascension game, as I really enjoy the new Energy resource. Some can argue that it is a little overpowered, but I feel that after a few games, any Ascension fan or new player could develop a game plan for working with, or without if desired, the Energy resource. The game plays out well just as its predecessors, but keeps you on your toes. It is a bit hard to avoid the Energy abilities altogether, so if this resource does not appeal to you, it may be a game to skip or just try out in a demo to see how you feel about it. Ascension : Rise of Vigil retails for $39.99, and I believe would make a great addition to any deck-building fan’s library.