You are reading
Written Review – Lords of Vegas 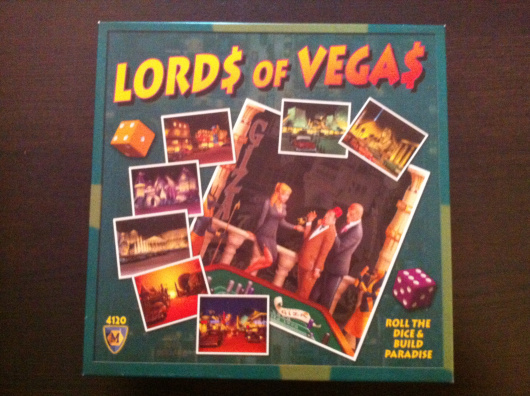 Do you have what it takes to be the boss under the shining lights of the Strip? Can you control the biggest, grandest casinos Vegas has to offer or will Lady Luck abandon you at the worst possible moment? Everyone wants to be the king but at the end of the day there’s only one Lord of Vegas.

Lords of Vegas is an area control and negotiation game for 2-4 players from Mayfair Games. Players play as developers trying to turn random lots into the grandest, glossiest casinos on the Strip. As a developer you can simply try building up your casinos but that would make you a prawn in the shark tank at the Tivoli casino. This is Vegas, baby, so why spend your hard-won money building when you can re-model, re-organize, or simply make your opponent an offer they can’t refuse to get a bigger casino?

In Lords of Vegas, there is a card deck representing each of the lots available on the gameboard as well as three special ‘Strip’ cards and the ‘Game Over’ card which signifies a final scoring round and the end of the game. Each regular card also contains the color of a specific casino. There are five casino colors, purple, brown, yellow, silver, and green. This color indicates which casinos will pay out and score points when they are drawn at the start of a player’s turn. 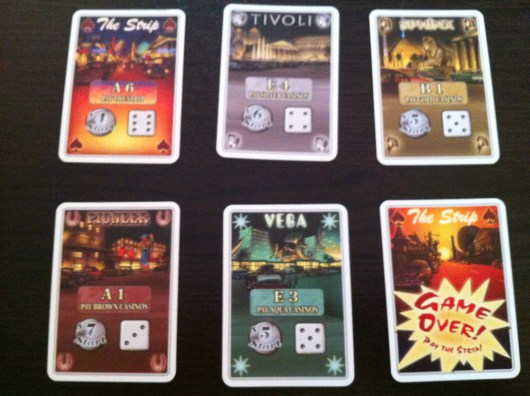 Some of the many cards you will encounter in Lords of Vegas.

At the start of each player’s turn, a card is drawn and the player is awarded that specific lot at no cost. Each lot contains a cost to build a casino and an illustration of a die which shows the die face that will be put face-up when a casino is built. This is important because the pips on the die indicate how much a player will be paid when a casino of that color is drawn at the beginning of a turn. This is the primary way players earn money in the game. Lots next to the Strip have the highest development cost but also pay out the most.

On their turn the player may take any or all of the following actions:

Build: Build a casino on a lot they own by paying the cost indicated on the lot. The player may choose any color casino tile to build that is available. This is a key decision in the game as there are only 9 tiles of each of the five colored casinos available. It also influences the possible size of a casino as well as possible payouts. Players place a die of their color in the casino with the appropriate face-up to represent their presence or ownership of the casino.

The yellow player begins their empire with a 4-tile grey casino.

Remodel: For $5 million (all money in this game is in millions) a tile, a player may switch out all the tiles of a casino they control for another set of tiles. This can be done to affect scoring, income, or possibly even allow the hostile takeover of another casino if the resulting casino matches the color of adjoining casino tiles.

Reorganization: By paying the sum of all the face-up pips on the dies in a casino a player can force a roll of all dice in the casino to determine the ‘boss’ of the casino. This is important because while everyone with presence in the casino will be paid when a card of its color is drawn only the ‘boss’ will score points. All players with dice present roll and the highest number becomes the ‘boss’.

With a slight remodel of a yellow to a purple tile, the green player is about to takeover a 4-tile casino!

Sprawl: By paying double the amount listed on a lot, a player may build a casino on an adjacent empty lot next to a casino they control. However, if the card representing that lot is drawn on another player’s turn, that player will replace the original die with their die, possibly changing ownership of the casino.

Gamble: Once during their turn, a player may visit another player’s casino and gamble. The amount bet is determined by the size of the opponent’s casino. The owner has the option of covering the bet completely or only half of the bet. If the gambler wins the opponent pays, if the gambler loses, the opponent collects.

In addition to the actions available to a player on their turn, negotiation between players is available at all times to all players, and this addition is one of the key things that make Lords of Vegas stand out  from similar games.

To succeed in the game you must eventually build bigger and bigger casinos in order to score points. Early in the game 1-tile casinos will score but as players progress around the scoring track on the outside of the board they will need 2-tile casinos, then eventually 3, 4, and 5-tile casinos to continue to earn points. Because lots are awarded at random it is very difficult to build a large casino. As a result players are constantly making deals with each other for lots, casinos, and cash to try and enhance their position. Without negotiation it is very difficult to succeed at the game. This means players are constantly involved in the game even when it isn’t their turn, making the game more interactive overall. Will you be a fast-talking, energetic salesman to close the deal or a calm and collected trader with that offer your opponent can’t refuse? Either way, deals are constantly being cut in Vegas and to be a winner you’re going to have to play the negotiation game.

During the game there are three ‘Strip’ cards and a ‘Game Over’ card that are seeded in the card deck during game setup. When a ‘Strip’ card appears there is a special scoring round where all casinos with at least one tile touching the ‘Strip’ are scored. Casinos that do not touch the ‘Strip’ do not score during this phase. The ‘Strip’ represents the famous Vegas strip and is in the middle of the game board, with the most expensive lots touching it. These lots are extremely valuable since they score during normal scoring and when a ‘Strip’ card is revealed.  When the ‘Game Over’ card appears the ‘Strip’ is scored one last time and the player with the most victory points is the winner!

The value of being on the ‘Strip’. Only the casinos that have a tile touching Las Vegas Blvd will score when the ‘Strip’ card is drawn!

The components are high quality and the Vegas theme  is strong on all components. The casino tiles in particular are very sturdy and well done. The paper money is flimsy and I highly recommend replacing it with poker chips as it fits the theme well and is much easier to handle which is important because money is changing hands every turn.

Medium. While the mechanics of the game are relatively simple, understanding scoring, payouts, reorganizations and the value of lots, casinos, etc. in negotiations takes a couple of playthroughs.

Excellent. Because the lots drawn are always random the game will never play out exactly the same. In addition, the near limitless player negotiating ensures that each game have a different feel.

Lords of Vegas is a fun game with a well-integrated theme throughout. The addition of negotiation really makes this game stand out from other area control games. The game plays best with the full complement of four players though is still quite playable at three. I would not recommend this as a two player game though it is supported. There are some luck elements in this game as regards the card draw, the reorganization rolls and the gambling. Aside from the card draw, the ‘luck’ factor is mitigated by the strategy you choose and the ‘luck’ factor generally fits very well with the overall theme of the game, you are building an empire of casinos after all. Players who do not like negotiation or who prefer more ‘euro’ style games that limit luck and player interaction may not enjoy Lords of Vegas. However, for those who like to occasionally dance with Lady Luck I highly recommend rolling those bones and grabbing a copy of Lords of Vegas!