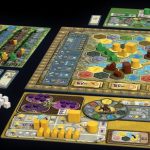 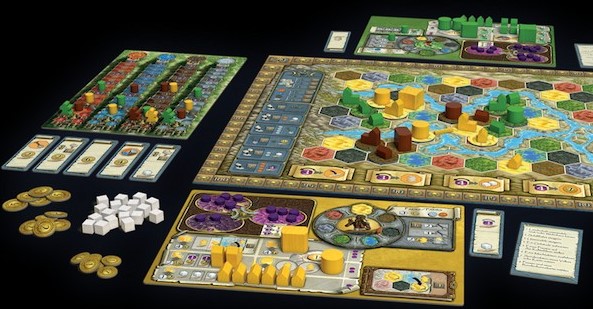 ZMAN Games has been known throughout the years to produce great quality games, and whether you’re a huge fan of Pandemic! or a casual player who enjoys a game of Carcassonne every now and then, ZMAN has you covered. Just recently they released an English version of the great German eurogame Terra Mystica, a wondrous terraforming game filled with fun and fantasy that they’ve been all to excited to market. We were lucky enough to grab a copy of the game, and immediately we were immersed in its wonder. If you’ve ever seen anything about the game you’ll no doubt get the feeling that it’s a daunting game to get to the table, but we can assure you that once you do you’ll find yourself stuck for hours. That being said, let’s take a look at what the game has to offer.

In the land of Terra Mystica there are 14 different races that dwell in 7 different landscapes. Each of these races is tied to their own landscape, and they are seeking to expand their territory to develop and grow. In order to do this they must terraform the landscape around them in order to make it habitable for their race. In order to survive these races must build all sorts of different structures, pray to the Cults of the elements, and use some elbow grease to ensure that they can continue expanding across the land.

One of the first things you’ll notice about Terra Mystica is that it comes with A LOT of chits and things. There are 7 different bags of player tokens, a bunch of chit boards, 7 player boards, the Cult track board, and of course the game board. Fortunately the team at ZMAN took the time to include some sweet little bags for you to put everything in once you’ve punched out all the chits, but it still can become a hassle when you want to play the game often (and you’ll want to, trust me).  I’ll touch more on this later, but I found a great storage solution which greatly improved the playability of the game.

For your first few games of Terra Mystica you’ll want to follow the setup rules found in the game’s rulebook. It details how to lay out the pieces, including all chits, for a 2/3/5-player game. (A 4-player game is basically set the same as a 5-player, only with one of the races removed.) Depending on the number of players you have you’ll want to follow the rules for choosing races and placing initial pieces on the board. The rulebook for the game is nicely laid out, and gives a step-by-step guide on how to set everything up, even if you don’t know what each piece is for. I’d suggest starting off with a 3-player game and following the setup rules for your first time around, provided you have at least 3 players, otherwise the 2-player game is perfect.

Terra Mystica takes place over 6 rounds, during which players will be competing to gain Victory Points. Players will take on the role of one of 14 different races in the game: Fakirs, Nomads, Halflings, Cultists, Alchemists, Darklings, Mermaids, Swarmlings, Witches, Auren, Dwarves, Engineers, Giants, or Chaos Magicians, and your goal is to terraform the landscape around you so you can grow and develop. Each round will have a special marker that will reward players with Victory Points for doing certain actions during that round, and the game has a final way to score at the end of the sixth round.

Once players have gotten their race (once you’ve played past the initial setup games they will be given out at random), gathered their starting income (noted on the top-right of their player board), and placed your initial dwellings on the board (the smallest of the structures) the game is ready to begin. Players will also determine the first player, and going counter-clockwise from the last player, each player will grab a starting tile which will give them extra bonuses throughout each turn. Gameplay proceeds in turns which are broken down into three phases: Income phase, Action phase, and Cleanup phase. We’ll take a look at each phase in a little bit of detail:

I won’t go into detail on all of the actions, as that will be for a “How to Play” down the road (spoiler alert!), but I will take some time to talk about a few of the different things you can do during your turn. Power is a great resource, and it will often get you out of binds when you need it. With power you can recruit priests, place a bridge, and a number of other things using the power actions. You gain power in many different ways: when someone builds or upgrades a structure adjacent to where you have a structure, by advancing in the Cults, or through your Income phase.

Workers come in handy too, as they’re needed to upgrade structures, build new ones, and advance your Spade and Ship tracks. You see, in order to terraform land around you it will cost spades. The amount of spades needed depends on the type of land you are trying to terraform, and where it is on your player board. For instance, if I was playing Dwarves and wanted to terraform a lake space, it would cost me two spades, as it is two spades away from my home terrain, mountains.

By now you’re probably asking, “What is this Cult thing he’s been mentioning?” Well, the Cults offer different advantages for your game. By advancing in each Cult you have the opportunity to gain power, being at certain places on each track can help at the end of each game round, and Cult advancement is an end-game scoring mechanic. For being the furthest along in each different Cult track you’ll gain Victory Points at the end of the game, then the second, and finally third. I personally don’t put a lot of time into the Cults until the final round, but they can really be a game-winner if played correctly.

Since we’re talking about end-game win conditions, let’s look at the biggest: having the most structures adjacent to one another. At the end of the final round the player with the most structures adjacent to one another gets a whole heap of Victory Points, then the player with the second-most, and finally the third-most. This is personally the way I’ve won the game each time, and it’s a whole lot of fun to build things up throughout the game and see the other players scrambling at the end as they’ve realized I’ve got a massive allotment of structures across the board. Something else to mention as well: once you’ve gotten four structures adjacent to each other, if their combined strength (found on your player board) is 7 or more you can found a town. Founding a town gives you a key, which is used to get to the final space on one of the Cult tracks, and other boons depending on the town tile you choose. This comes in handy as well throughout the game, and it’s key to remember that towns must be separated by at least one space (example: you can’t have 8 adjacent structures and say they’re two different towns).

Back to the Basics

In summary, throughout Terra Mystica you turn workers into spades to terraform the landscape around you. You then build structures, from dwellings to tradehouses to temples or a stronghold, and then from temples to a sanctuary. Dwellings provide you with workers, tradehouses provide power and money, and your temples and sanctuary provide priests. Planning how you build will greatly help you choose a strategy to play by, which will make the game really fun.

Something else of note is the spade track. In order to get spades you must spend workers, and when the game begins you’ll be spending 3 workers for each spade you need. On your turn, as an action, you can spend workers, money, and a priest to advance your spade track, which will lower the amount of workers needed to gain spades, as well as providing immediate victory points. This is handy because it will make your end-game a lot easier to attain once you get to the later rounds.

On a final note, each faction has a special ability that can be used throughout the game, and a special action that happens once you build your stronghold. For example, the Swarmlings gain 3 workers each time they found a town. On top of that, once per turn, once they’ve build their stronghold, they can take a special action to upgrade any one of their dwellings on the board to a tradehouse without paying the cost.  The other factions follow suit, but their specialties are different.

From the minute I got Terra Mystica to the table I loved it. It may be a bit of a long game, but once you get past your first few games where you setup according to the book, it becomes much quicker and a lot more fun. The components may make the game seem a bit daunting, but though there are a lot it’s still enjoyable. Back to my storage solution I spoke of earlier, I picked up a plastic bead container from a local arts and crafts store and it holds everything right in the box. I kept all the player pieces in their own bags, and they tuck nicely between the container and the side of the box. It makes setting up really quick, which makes the game more playable in-turn.

I think this game is a perfect choice for game night, and it becomes more enjoyable as there’s not really a surefire way to screw anyone over, save for terraforming and building directly in front of them to cut them off somewhere. There’s a lot of room for expansion, and no two games play exactly the same. There were a few finer points I didn’t touch on, such as explaining the start tiles in detail, but I’ll save that for a “How to Play” video in the future. If you’re looking for a heavy game that’s filled with fantasy and fun, this game gets my complete vote.