You are reading
Written Review – The Lord of the Rings: The Fellowship of the Ring Deck Building Game 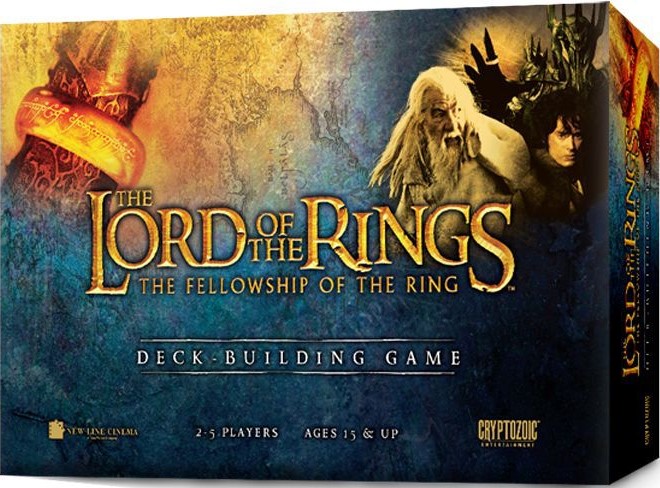 I’m a huge fan of The Lord of the Rings. I’ve read the books, watched the films, and played just about every game under the sun that’s themed after the property. Recently Cryptozoic Entertainment, the same developer responsible for the DC Deck Building Game, released The Lord of the Rings: The Fellowship of the Ring Deck Building Game. It takes an already great system and offers players the opportunity to play as their favorite heroes from Tolkien’s epic tales, though it is skinned in imagery from the Peter Jackson films. We were lucky enough to receive a copy of the game and have been playing it thoroughly, so now it’s time for our review!

The Lord of the Rings: The Fellowship of the Ring Deck Building Game is set so players can become their favorite heroes from The Lord of the Rings series. It runs on the Cerberus Engine, one of Cryptozoic’s most prized systems. The story thus far depicts the heroes facing different enemies from the story, leading up to the fierce Lurtz, the Uruk-Hai. As far as the story in this game goes, it follows the events and characters met in the first film/book in the trilogy.

The goal in this game is to defeat all of the Archenemies before the Main Deck runs dry, and after completing this task, be the player with the most Victory Points based on the cards in your deck. It plays much like the DC Deck Building Game, though I feel that it’s fixed a lot of issues that players saw with that game.

One of the things that makes this game unique when compared to other deck building games is that it only uses one resource to manage – Power. Where other deck builders like Ascension have you managing Strength and Runes, you only need to worry about one resource in this game. It really makes the game easier to play, and much faster in my opinion.

The Power-based system that the LotR DBG uses is simple enough to learn, and really helps streamline gameplay. Everything you use will gain you Power by playing it from your hand, Power that you’ll then use to purchase or defeat new cards to add them to your deck. Power is also used to defeat Archenemies, which is the major game-end condition! Of course there are some “dead” cards that count as giving zero Power, and others that count as negative Victory Points if you have them in your deck at the end of the game, so watch out!

Before we get any further, let’s talk a bit about setup. To begin the game, the Hero cards are shuffled and one is dealt to each player. This helps keep the gameplay varied, as each Hero offers something different for the player. Alternatively players can pick their own Hero, but it’s encouraged to keep it random sometimes to help ease the flow of gameplay. Depending on the Hero you receive you’ll have access to a special card to put in your deck. This is one of the major differences versus the DC Deck Building Game. Instead of having a power that can be used each turn, your Hero nets you a powerful card that gets put in your deck, which will only come up when you get it in your hand.

After choosing a Hero and gaining their special card, players receive a deck consisting of 6 Courage cards and 3 Despair cards. This will create a 10-card deck that they’ll start with. The deck is shuffled and each player draws a hand of 5 cards, much like with other games in this genre. Courage cards provide Power, where Despair cards are an example of the “dead” cards I mentioned earlier.

Three sets of cards are placed to the right of the play area and are specific to the game. The top pile is Valor, the bottom is Corruption, and the middle is where the Archenemies will hang out. Each game will include 8 Archenemies, though there are a total of 12 in the game. Something really cool about this game is that there are different levels of Archenemies players will have to defeat. Up first is level 1, and the only Archenemy of this level is the Nazgul. Up next is level 2, and there are a total of 5 level 2 Archenemies. Players will shuffle all 5 of them and then select three at random to use in the game. The same follows suit with the level 3 Archenemies, of which there are also 5. Lurtz is the one level 4 Archenemy, as well as the end-game Archenemy and he goes in the middle pile at the bottom, facedown. On top of him go the three level 3 Archenemies, then level 2, and finally the Nazgul, though he’s the only one placed face-up on the pile. This creates the Archenemy deck that players will face throughout the game.

The rest of the cards from the Archenemy deck are returned to the box, without players knowing their identities. This provides variety in gameplay. As the final part of setup, the rest of the cards for the Main Deck are shuffled and put to the left of the play area. In the LotR DBG players will encounter several types of cards: Artifacts, Enemies, Maneuvers, Allies, Locations, and Fortunes. Each type of card offers something different, and they act in their own way. Once the Main Deck is shuffled, the top five cards are drawn and placed next to the deck horizontally, creating what’s called the Path. This is the area from which players can purchase/defeat cards using their Power.

Unlike other deck building games, players won’t be in a race to buy up all the cards from the Path in an effort to get as many Victory Points as they can. Throughout the Main Deck sit Enemies who will ambush players once they are revealed. Ambushing Enemies will hurt your opponents dearly when they are revealed, and the mechanic is quite unique. Archenemies will ambush players as well, though they hit all players when ambushing, whereas the regular Enemies mainly target a single player.

On a player’s turn they may play cards from their hand, totaling their Power for the turn. Next they can use this Power to purchase as many things as they can from the Path, or the pile to the right of the Path (where the Valor cards are). Each card has a cost, listed in the lower right corner of the card. I really like the way the buying process is run, simply because I’ve played too many games were I only get one purchase no matter how much of a resource I possess. The cards in the Path aren’t replaced until the current player ends their turn, and this is where the ambush comes in. If an enemy with an ambush is revealed from the Path while replacing cards, it hits the next player about to take their turn. Ambushes do a lot of different things, from forcing you to discard cards, gain Corruption, and destroy cards from your hand or discard pile. In short, they’re nasty.

Buy gaining different cards from the Path players will be able to do a lot more on their turn, allowing them to amass a large amount of Power to spend. With enough Power they can purchase an Archenemy, and help drive the game to its end. Throughout the game players will see familiar faces in the Ally cards, as well as some memorable places in the Location cards. A lot of the cards will give players certain Victory Point levels at the end of the game based off what’s in their deck, so there’s a lot of opportunity to add strategy to your play. I think Cryptozoic did a great job on balancing what players can do with the cards they have, especially when it comes to defeating the Archenemies. If you build your deck well enough you can buy several things, including an Archenemy, on a turn, but unless you think ahead chances are you’ll only be able to afford the Archenemy, or something from the Path.

Once all of the Archenemies are defeated the game instantly ends. Players then take their decks and look at the cards they have. In the bottom left corner of each card is a Victory Point value. Some offer more than others, and cards like Corruption have negative values that will take away from your total. You’ll add up all of the Victory Points on your cards, subtracting for any Corruption cards you have. The player with the most Victory Points is then declared the winner!

I went into this game with a lot of different assumptions. I first thought that only having one resource would slow the game down and make it less fun, but I was completely wrong. The one resource of Power is not always easy to build up, and it takes some clever play to get enough to defeat some of the tougher Archenemies in the game. I also thought that it could possibly be just some other game with the Lord of the Rings license slapped on it. Again, I was happily proven wrong. The LotR DBG is a very solid game that performs exceptionally well, and offers tons of fun each time you bust it out (which you’ll do often). Some players had issues with the game being skinned after the films, but it’s merely an aesthetic that doesn’t affect gameplay. I personally enjoyed the movies, so it’s a big bonus for me.

The game is also really easy to get to the table and get playing. A lot of players enjoy picking this up, and it’s also great for getting new players into the deck building genre. If you’re looking for a great, fun game with a fantastic theme in the line of deck builders, this would definitely be my first choice.