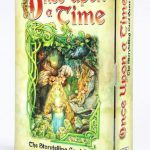 You are reading
Written Review – Once Upon A Time 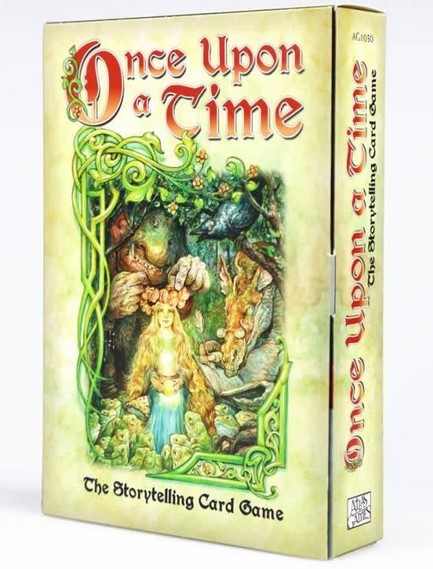 While many people are comfortable with the traditional fairy tales that exist, some wonder what would happen if the rules were changed up. Twists were taken just when the story got good, took a turn for the worst, or a new element of surprise was thrown in. For those people interested in telling their own stories and boosting their creativity, there is a wonderful card game in the world called Once Upon A Time. Once Upon A Time is an ever-changing storytelling card game made for 2-6 players. Originally produced in 1993 by Atlas Games, the game has since undergone a few rule re-writes and a few editions. Today, we are looking at the third edition, published in 2012 with new art and a simplified rule sheet.

The game’s contents are very simple and straightforward. A small rule sheet, and 3 types of story cards are contained in the box. The first card type is a Story card. The second is an Interrupt Story card, and the final is an Ending card. Both the Story and Interrupt Story cards are divided into categories by the symbols located on the upper left corners of the cards. The five elements are Character, Thing, Place, Aspect, and Event. The Ending cards are each individual player’s goal, as they try to steer the story being told to conclusively lead to their Ending card. The artwork on these cards is done by Omar Rayyan and is beautifully detailed to fit any fairy tale.

The game begins with dealing cards to the players. Shuffle the Interrupt Story and Story cards together to make one large deck, and then shuffle the Ending cards together in a separate pile. Each player takes one Ending card and keeps it secret. Then, each player is dealt Story cards equal to 11 minus the number of players, so the minimum number of cards would be 5 in a 6 player game. To determine who goes first, draw a card from the Story deck and determine which player most looks like or resembles the card’s subject, and that player goes first.

The first player will begin the story with “Once upon a time…” and begin a story based on the cards in their hand. When you mention an element on a card in your hand, the story-teller will place that card on the table. This will continue as long as the player can keep the story going, or until someone plays a successful interrupt.

For example, Nathan begins the game : “Once upon a time, there lived an old woman who lived in a cottage. This cottage was nestled deep in the woods along a river-” At this point, he has likely placed a Woman card and a Cottage card on the table, keeping his story going. At this point, Lauren calls out an Interrupt! She drops a card that reads River. Because this element was mentioned, it is a successful interrupt, and Nathan’s turn ends, and he draws a Story card. She continues the story : “This river, however has run dry, because it has been cursed. This curse was placed on this river years ago when she read out of an old book-” She has placed a Cursed card and an Old card. However, Allie sees a chance and she interrupts the story. Because the Old card shares an element with a card in her hand that says Interrupt!, she may now take over the story. She continues “This book wasn’t old, it was enchanted to look as such…”, playing the Enchanted interrupt card, and continues the tale.

Players may also choose to pass the story if they have become stuck due to the cards in their hands. When a player passes the story, they may discard a story card. If a player attempts an interrupt and is deemed unsuccessful by other players, she discards that card and draws two Story cards. If at any time a player plays all the cards out of her hand and plays her ending card, but the players decide it does not make sense or follow with the story, that player must discard their ending and draw a new one.

The story-teller must always be on their feet, however, because other players have opportunities to force that player to pass the turn by challenging the teller. If the story-teller gets stuck (a 5-10 second pause with no continuation or cards played), contradicts previous events in the story, rambles aimlessly, takes the game to a level of silliness that doesn’t even make sense in a fairy tale, or lists unimportant elements just to play cards from her hand. All players must agree on the outcome of a challenge to force that player’s turn to end.

If at anytime two players interrupt at the same time, the first one to put the card on the table is the new story-teller. Now, while an unsuccessful interrupt will cause that player to discard a card and draw two, there is no penalty for the 2nd place interrupting player in this case. It is important to know that Ending cards cannot be interrupted. The first player to play all the Story cards from their hand and conclusively lead up to their Ending card is the winner!

As with any game, the rulebook encourages players to be lenient in regards to younger players and to not use interrupts as an aggressive thing, or use challenges as a tactical way to win. The game is meant to move at a fast pace, but is adaptable for any gaming group, regardless of age or experience.

I had been looking at this game for a long time before I picked it up, and I am so glad that I did. Our games took turns from serious story-telling to silly connections, and depending on your gaming group can be a great combination of both. I look forward to playing this game with my son once he is old enough to participate, but will have great fun with it in the meantime. Once Upon A Time is a great game for children and adults alike, and will bring you hours of entertainment. Some may feel that even $19.99 is high considering that the box only contains cards and a rulebook, but I strongly feel that the endless playtime that you will get from this box makes it worth every penny. I believe that the creativity this game brings to the table is great for any gamer, regardless of experience level.