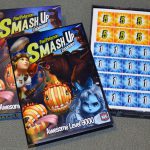 You are reading
Written Review – Awesome Level 9000 Smash Up Expansion

Great possibilities for battle tactics came together when AEG brought us Paul Peterson’s shuffle-building game, Smash Up. Dinosaurs, Wizards, Tricksters, Aliens, Zombies, Pirates, Robots, and Ninjas could go head to head, and each faction had its own special strengths and weaknesses. The combinations worked differently every time the factions were dealt, making the game very re-playable. Now, Smash Up has been taken to a new level – Awesome Level 9000, that is. Awesome Level 9000 brings us four new factions, new abilities, and new bases to break as you battle your opponents in a race for 15 victory points.

This new expansion opens up with its own new rulebook, covering some of the new text on the new cards, but is overall a recap of the original rules. Also new with this set is a chit-board with victory point tokens for an easy way to keep track of each player’s quest for domination. Included also is a full set of bases, including not only the 8 new ones but the original bases from the core game. Then, the best part of the expansion, the new factions! Awesome Level 9000 brings us the forces of Ghosts, Steampunks, Bear Calvary, and Plants. Each of these new factions work in a different way, so let’s take a look at what they do.

In addition to the new bases for your factions to fight over, a new mechanic has come to the battlefield : Talents. Talents are abilities on minions that can be used once per turn, as opposed to the Ongoing effects that were introduced in the core game. These talents vary across the factions, working with their individual ideal tactics.

The strength of Ghosts is not in the numbers of the cards being held in your hand. This faction works to get rid of the cards in your hand in order to boost the strength of played actions and minions. In addition, some cards make the action of discarding cards from your hand work in your favor. For example, there is an action called The Dead Rise which allows you to discard any number of cards from your hand, and then put a minion into play from your discard pile with power less than the number of cards discarded. Free discard pile cycling is always an advantage in Smash Up!

I was impressed by Steampunks, with its abundance of base actions and its ability to “recycle” itself. Many cards allow you to use actions multiple times, as well as pulling them out of the discard pile. Locking down a base and making its minions easily transported between bases is seen frequently. Often, the cards for the Steampunks faction won’t even hit the discard pile, especially when Escape Hatch is played on a base, which states that when a minion at this base would be destroyed, return it to its owners hand instead, which is a nice insurance system for playing your strong minions.

The strength of Plants are quite similar to our realistic weeds! Plants grow quickly and take over bases with both its minions and actions. Somewhat opposite of Ghosts, Plants allows you the choice to add more cards to your hand with some minions, in addition to searching your deck to replace smaller minions with larger ones. This faction’s actions are incredibly powerful, such as their ability to reduce a base’s breaking point to 0 or establishing its minions by making them indestructible and unmovable!

And lastly, we get to see the Bear Calvary in action. Bear Calvary has a “flaunt your strength” attitude with large minions, and those that get bigger when they are the only minion you control present on a base. Many minions will blow up other moved minions with strength less than its own, or claim a base with High Ground to destroy ANY minion moved to the affected base. You’re Pretty Much Borscht moves all minions besides the card players’ to any other base, which can quickly reverse the progress your opponents make on a favored base!

I was just plain excited to add more factions to my Smash Up games, and AEG did not disappoint. I enjoy the continued delivery of logical mechanics for each faction and the  way that they perform in the game. I am glad that, until more expansions emerge, that Awesome Level 9000’s contents fit in the core box with its organizational system, as I like to keep my games together. Personally, I think that Bear Calvary is my favorite of these new factions with its sheer power. If you liked the original Smash Up, I don’t have a doubt in my mind that you will love Awesome Level 9000. This expansion retails for $19.99, and is money well spent for the countless games of base destruction that will follow.