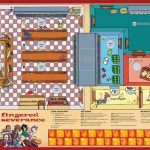 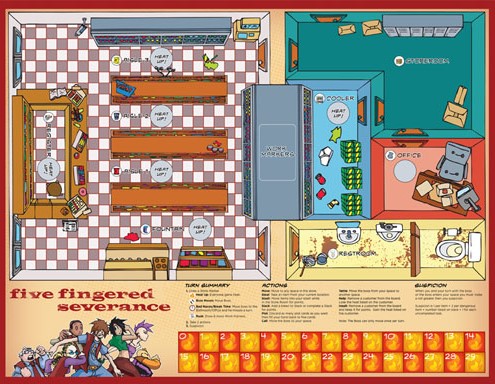 Games allow us to live fantasy lives that normally we couldn’t (or wouldn’t) do otherwise, and I believe that shoplifting is one of those things that most people wouldn’t do. Well, in Five Fingered Severance, you get to experience what its like to do that. But, you’re not the only one trying to steal things, because there are customers to insult, small jobs to be done, and your coworkers are tattling on you. Produced by Minion Games in 2011, Five Fingered Severance takes place in a small convenience store that is about to get shut down, and you are starting your last shift. Everyone’s getting fired at the end of the day though, so don’t hold back, and check this game out.

Upon opening the box, you will find a humorous rulebook, a game board, and numerous cards and tokens which include:

Plot cards are things you can draw on your turns to further push along the end of another player’s employment, your location, and more. Playing plot cards do not count as actions, which makes them all the sweeter. Character cards determine who you are playing, and what special skill you might possess. Work marker cards are drawn throughout the game during each player’s turn and will indicate jobs to be done, customers that enter the store, the boss moving throughout the store, and different ways to slack off.

Item tokens are placed in their appropriate places throughout the store and are things you can steal and add to your stash. some are dangerous items which are worth more points but harder to successfully stash away. Slack tokens are what players use to track their “slacking” points at the end of the game. The game board itself has a heat tracker which your character’s tokens are placed on to monitor how much heat is on them from the boss. And finally, stand up character tokens for every player.

So, how do you play this? First, set up the board. Place the boss in the office. Shuffle the item tokens by location, and stack the items across the board in their appropriate places. Shuffle the work marker cards, and draw 6 to resolve to start the game. These cards are placed in their marked areas on their cards, whether it be slacks, jobs, or customers, but event cards are ignored in this setup phase. Next, the character cards are shuffled and placed face down, with each player drawing a character to determine who they are playing. Their corresponding figure is placed in any empty space on the board, and discard the remaining character cards for the rest of the game. Plot cards are shuffled, and 5 are dealt to each player (except for Wendy, who gets 8, then discards down to 5). The remaining plot cards are placed face down, and you are ready to play the game!

During each player’s turn, they may perform two actions. You may use those plot cards we talked about to take actions for free, and depending on which plot cards you have might put you at a major advantage over others. Certain events and insulting customers will cause your character’s heat to go up, while helping customers and doing jobs around the store will bring your heat down. To stash your items, you must move your character to the store room and use the “stash” action. It may not be a surprise to find out that you cannot stash items while a customer or the boss is in the store room. Once stashed, these items cannot be found on you and will count towards your final score.

Other actions include working, stealing, stashing, slacking, calling the boss to your space, tattlling, helping a customer, insulting a customer, and moving. A move action can be to any place on the board, but it should be noted that the boss can only move once per turn. If the boss ever ends up in the same space as you are, you must make a suspicion roll (+1 for each unstashed item, +2 for a dangerous item, + the number listed on a slack, +1 for jobs left undone = your suspicion number). If you roll higher than your suspicion number, you avoid getting caught. If you fail, all face up item tokens are discarded, and heat is increased. These items are then put in the office. If you are caught slacking off, you keep the slack counters, but can no longer do that slack. If however, you are caught during a final slack, you are immediately fired.

Five Fingered Severance is one of those games that supports the saying to not judge a game by its cover, because I was very impressed with the game once I played it. The balance of humor and strategy made it fun but kept me focused, and I believe that others will enjoy the game as well if they give it a try. I do feel that the board can get quite cluttered quickly, and is a pretty long game considering that it mostly relies on lucky die rolls and card draws, which makes it a little rough from time to time. Also, some characters have skills that are hard to compete with (i.e. – Lucy, who steals 2 items every time she would steal). Despite this, I think the game is fun. Five Fingered Severance retails for $44.99, but take cash and remember to not just swipe this one off the shelf, lest the boss catch you (and real-world repercussions are much worse than in this game!).