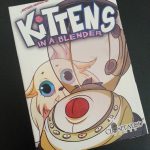 You are reading
Written Review – Kittens In A Blender 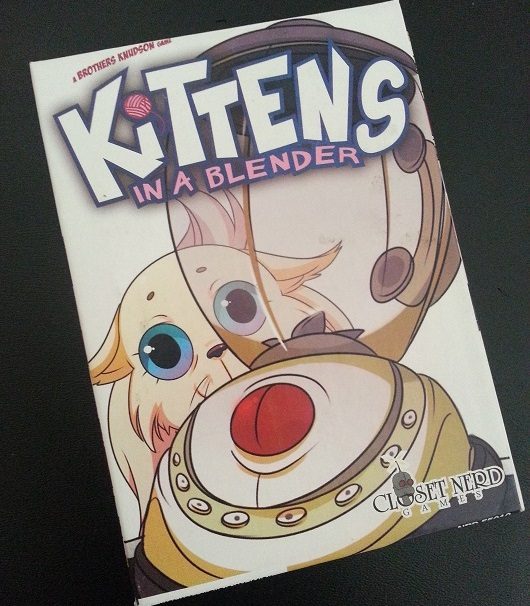 Have you ever wondered what cats do when you’re not around? Or even worse, what they might do in a kitchen if left unattended? The people at Closet Nerd Games certainly thought about what might happen in that situation! That is why they brought us Kittens In A Blender in 2011. People of all ages enjoy this game, even though it might seem a little dark for younger audiences. If you are ready for the ultimate “kit-chen cat-astrophe”, read up about this bizarre little game for 2-5 players.

When opening the box, you will find the following :

In the pile of playing cards, you will find 64 kittens (consisting of 4 colors with 16 kittens per color), 18 Kitties on the Move cards, 8 Blends and 8 Blend/Pulses, 4 Dog’s in the Kitchen, 2 Kittens in the Blender, 2 These Kittens in the Blender, 2 Kittens on the Counter, and 2 Kittens in the Box. The artwork on the cards illustrates a different kitten on every card, and some of them are quite hilarious. The other cards listed are cards used to move kittens across the playing field to give yourself an advantage, though you may never know what cards your opponents are holding that could ruin your kitty-blending schemes.

To begin, the oversized Blender and Box cards are placed in the top and bottom halves of the box that the game comes in, with space in between. This space is the counter in this game. Each player chooses a color (red, green, yellow, or blue), and the 16 cards of that color are mixed into the main playing deck. Any colors not chosen are taken out of the game and set aside. Thoroughly shuffle the deck, and deal 6 cards to every player from the deck, and someone is chosen as the first player – the cattier, the better!

Each turn, a player must play 2 cards, and then draw back up to 6. If the deck runs out, it is not reshuffled, because the end is near! Once all 8 Blend cards and all 8 Blend/Pulse cards have been played, it is time to count up points and determine a winner! Blended kittens count as negative points, kittens saved in the box are positive points. So, before we talk about scoring, let’s talk about what the cards in the deck can do.

There are 18 cards called Kitties on the Move, and will be numbered with a 1, 2 or 3. This means that any kitten(s) can be moved by that many spaces. Let’s say a Kitties on the Move 3 is played. You can move one of your kittens out of the blender and onto the counter, and 2 of your opponents’ kittens that is on the counter into the blender. Or, you can move one kitten from the blender to the counter, the same kitten then to the box, and another kitten to another location, as long as each “move” is only one space.

Other move cards are not as plentiful, but can be game changers! Kittens in the Blender says that ALL kittens that are in the Box and Counter are immediately moved to the Blender. These Kittens in a Blender allows the person who played the card to choose all kittens of one color to move to the Blender. Kittens on the Counter moves every kitten in the Box and Blender to the Counter. And finally, Kittens in the Box moves all kittens in play to the Box. Dog’s in the Kitchen doesn’t move kittens, but its indicated direction (left or right) dictates where your hand will be passed. You may have been holding on to cards or waiting to do a combo, and it can all be ruined by being handed an awful set of cards!

Now…the part we love the most. Blending those adorable little fuzzy kittens. If any kittens are in the Blender and a Blend card is played, bad things are about to happen. If the Blend is successful, those kitten cards are placed under the blender, and will count negatively against the players of those colors. If any kittens are in the Box at the time of a successful blend, they are saved, and are positive points! So how do you stop a Blend? Remember the other 8 cards? A Blend/Pulse can be played to stop a Blend and foil your opponents devious plans. Why would you do that to such cute kittens? But, a Blend/Pulse card can also be used in the same manner that a Blend card would be.

Two rules to remember when Blend cards are played are as follows : when a Blend or Blend/Pulse card is played, it does not go into  a discard pile, but played face up in front of the player to keep track of how many have been played. And the other rule is that any kittens that happened to be on the Counter at the time of a successful blend immediately get moved to the Blender to see what all the fuss is about.

So, scoring. Each kitten saved under the Box is worth 2 points. Then, each kitten blended under the Blender is a -1 point to the player’s score. The player with the most points is the winner. If there is a tie, the player with the most Blend and Blend/Pulse cards in front of them is the winner. Still a tie? Then, that’s just how the game ends. Just a tie, and blended kittens.

I apologize to my cats after every game, but I can’t say enough good things about this game. It is simple and easy to teach to your friends, although they may question your sanity after you explain what kind of game you’re about to bring into their lives. I also personally like that all components of the box are used as locations in the game. Whether you like cats or not, everyone with even a mild sense of humor will find Kittens In A Blender to be a good time full of laughs and jaw-dropping moments when your opponents activate a full Blender and you have nothing to counter it. If you’re looking to pick up this game, I will throw in a word of caution. It is available online, but it is quite pricey. The game is currently sold out and is hard to find. If you happen to stumble upon a copy in a retail store, I would highly recommend picking it up.