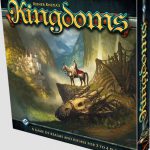 You are reading
Written Review – Kingdoms

Euro-style games have never been my forte, and I usually deal with resource management only when I am playing a real-time strategy computer game.  I’ve been trying to get into all sorts of gaming, and that’s why I decided to try out Kingdoms from Fantasy Flight Games. Kingdoms is the English version of Auf Heller und Pfennig, a game where players fall into a medieval world where they’ll need to place tiles and collect gold. Another game by Reiner Knizia, Kingdoms packs a lot of fun into a small package.

Kingdoms is a bit different than its alter ego, Auf Heller und Pfennig. In this version players try to collect the most gold by establishing castles in the richest regions of the realm while avoiding treacherous hazards. Players will play tiles that will increase or decrease the value of certain areas, and players will need to think strategically in order to come out the wealthiest in the end.

Out of the Box and Setup

Kingdoms comes in a smaller box than most other games, but the components within are solid. Inside the box are 40 different plastic castles, 10 for each color (red, green, yellow, and blue). There are also 64 tokens representing different denominations of gold and an Epoch (or round) marker. There’s a sturdy game board, a rulebook, and finally 23 different cardboard tiles representing resources and special game tiles.

Each of the components is of the quality one would expect from Fantasy Flight, and the game’s art is really well-done. Everything is nice and colorful, and you can really distinguish each piece from another, especially when it comes to the castles. The detail on the plastic pieces is in-depth.

Kingdoms takes no time to set up and get going. Each player will choose a castle color and take all the castles of their chosen color. Then all of the tiles are shuffled together and placed facedown in their respective area on the game board. The gold is then divided into its different denominations and placed in its area on the board as well. Each player draws a tile from the pile – this will serve as their starting tile. The Epoch marker is placed on round one of the Epoch track and the game is ready to begin!

A player is randomly chosen to go first, and they will take the first turn. On a player turn they have a number of actions they can take:

Players also have the ability to pass, but only if they cannot take one of the above actions. Also, once a castle has been placed on the board it cannot be moved or replaced for the rest of the epoch.

The main goal in Kingdoms is to place your castles in areas where they will score the most gold. The game’s tiles will have numeric values on them with either a plus or minus sign. The positive numbers give a plus to the row and column they are placed in, while negatives give a negative to the row and column. There are special tiles that have different abilities, for example:

Players will take turns placing tiles on the board, increasing or decreasing the value of rows and columns. They’ll also place their castles in areas where they will be the most valuable. Once all of the spaces on the board are filled you move on to the scoring phase. This also signals the end of an epoch.

During the scoring phase players will receive, or pay, gold depending on how their castles are set up. When scoring you score each row, starting with the top row moving down, and then each column, starting with the left column and moving right.

Scoring works as such: players will add up all the positive tiles in a row/column and subtract the total of the negative tiles from this number. The result is then multiplied – for each player – by the total ranks of castles they have in a row. Castles come in ranks from 1-4, so playing your castles in certain areas is very important. Once you’ve scored a row or column, players will either pay or receive gold from the bank. Here’s an example of scoring:

In the first row there are 3 positive tiles, all giving +1. There are also 2 negative tiles giving -1. The blue player has 1 rank 3 castle in the row. When players score this, they will take the positive total of tiles, 3, and subtract the negative total of tiles, 2, from it. The result is 1. They multiply this by the total ranks of castles in the row, blue has 3 ranks worth of castles, and that player will either owe or receive gold. In this example the blue player will receive 3 gold for this row.

Once all the rows and columns have been scored, the board is cleared off, all the tiles are shuffled together and placed facedown back in the tile supply area. The Epoch marker is moved to the second round on the Epoch track, and all players each draw one random tile from the supply for their second epoch starting tile. Here’s where the change comes in – all of the player’s castles above rank 1 are sent back to the box. Players only start with their rank 1 castles for both the second and third epochs. This ensures more tiles will be played and it makes the next two rounds much more difficult. Play continues the same way until all of the board’s spaces are filled. Players then score, and start the final epoch. The player with the most gold at the end of the third epoch wins.

Though I had some issues with only being able to use rank 1 castles in the last two rounds, I had a whole lot of fun with Kingdoms. Depending on the tiles you get you can really make life difficult for your opponents, but at the same time it could happen to you. There are some rules variants that make the game even more interesting, and with the games not taking so long to play you can get more than one in on a game night. Kingdoms is an excellent strategy game and a lot of fun with friends. If you haven’t grabbed a copy of this game I’d recommend you track one down. It’s not expensive, and you get a lot of bang for your buck with this one.