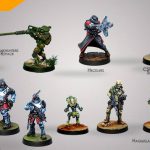 You are reading
Initiative : Tabletop Talks With Infinity, Creator Of The Future Belongs To Us

I:T) What were the driving forces that lead to the creation of “The Future Belongs To Us”?

I) I found all of the existing roleplaying systems out there to be lacking. I wanted a system that was more engaging to the players and less demanding of the GM. It was important to me that the game uses only a single die for simplicity and precision.

I:T ) Was this a project that was a long time in the making?

I) I’ve been developing both the DiceLight system and “The Future Belongs To Us” setting for years. I started out running in a modern day setting with the players taking on the roles of vigilantes to fight crimes that the police couldn’t handle. The game evolved from there. I have run other settings with the DiceLight system including a couple medieval/epic fantasy campaigns and superhero/comic book style games, but the system was really developed for the near future setting of “The Future Belongs To Us”.

I:T ) What aspect of “The Future Belongs To Us” are you the most proud of?

I) I’m most proud of the response I’ve received from people who have played my game. I really appreciate all the positive feedback and encouragement I’ve gotten from all the players, past and present.

I:T ) What do you think sets this game apart from other RPG’s and makes “The Future Belongs To Us” the best choice for someone?

I) The “Future Belongs To Us” gives players a selection of defined abilities to choose from, a high level of flexibility in character creation and advancement, and isn’t bogged down by legacy gameplay mechanics. It has a customizable armor system that separates the amount of protection the armor gives you from how much of your body is actually protected. The game also rightly separates manual dexterity from full body agility. Appropriately balanced ability costs also sets the game apart from many RPGs where ability costs are usually assigned uniformly or with little variation. Many people show a lot of excitement and enthusiasm when they are playing, particularly when they get to play a “Genetically Enhanced Kid”, or GEK. People have praised the game for being a good choice for both loose story driven style of play and highly tactical/high intrigue style of play.

I:T) If someone were hearing about your game for the first time, what would you most want them to know about it?

I) I would want them to know how much freedom of choice it gives the players while still playing very smoothly.

I:T) What do you find to be the most intriguing thing about the world that “The Future Belongs To Us” is set in?

I) How the Freedom Underground characters play off each other to achieve their own personal goals while still working together as a team. As the game lends itself to specialization, it avoids the pitfalls of cookie cutter characters that can all do basically the same thing. Since the party members each have different talents, they can strike deals with each other, which as a GM can be quite entertaining.

I:T) Since “The Future Belongs To Us” uses a new dice system, could you explain to our readers how the DiceLite system that the game utilizes works?

I) Sure. The most important factor in determining how difficult an action is to perform is how the player describes what he is trying to do in relation to the story. When performing feats that heavily utilize the use of your senses, or physical feats that require speed and coordination, you roll the twenty sided die and add it to either a Proficiency or Attribute rating. Proficiencies are just specializations of the base Attributes and are completely optional. Knowledge’s, Skills, and some physical feats do not require a die roll, though they may be used in conjunction with a Proficiency such as “Sleight of Hand” in certain cases when every second counts. Based on many situational modifiers, the GM determines how well you succeed and how long it will take you. There are much more complexities to the DiceLight system, but those are the fundamentals.

I:T) Would you consider the system that the game uses to be friendly to new gamers and if so would it still draw in seasoned RPG gamers?

I) I have had many young kids come play in my game with no difficulty only to find out months later that this is the first roleplaying game that they have ever played. I have joined existing roleplaying groups that give my game a try. The next thing I know, I have people emailing me countless write-ups for their characters and discussing what their characters are doing between game sessions that is not part of the main plot. Regardless of experience level, I find a high level of enthusiasm coming from players towards the game that I really enjoy.

I:T) I know there has been Beta testing groups of the game. What has been the biggest response from the play testers?

I) They really love trying new things with the game and want to push the envelope as far as they can get away with using the Technology Creation Skills and GEK abilities. I have run one shot sessions where they got to play as the major antagonist groups such as the Hardbodies and UNE. The game really brings out people’s creativity in a way that I have never seen in any other RPG.

I:T) With the official release just over a month away what is the number one thing on the mind of the team at Ataraxy Publishing?

I) We have a lot of things planned in the coming year to prepare for but we want to stay mindful of the existing fan base as we open up to the general public. Their support got us to where we are now, and I want to personally thank all of them for their involvement.

The world of RPGs has a new product that adds to the rich tapestry of the gaming world. I am anxiously awaiting “The Future Belongs To Us” and can’t wait to find my place in the world. With many new people, places and interactions awaiting you within the confines of this game I can’t see any reason not to check it out. I have no doubts that hours of campaigning fun await those that choose to enter the near future and play their part in this brand new universe.