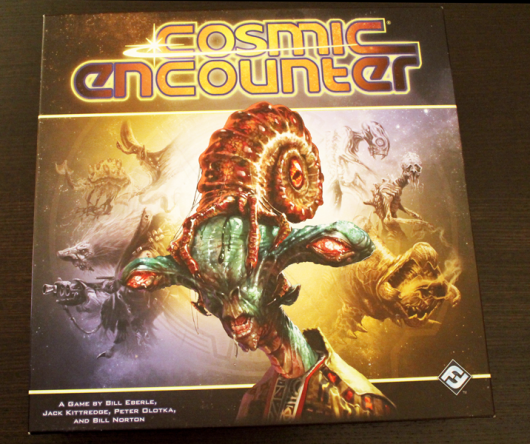 Are you ready for some spaced-out galactic gameplay? An entire galaxy of possibilities awaits those brave enough to leave their home systems and establish 5 colonies on alien worlds in Cosmic Encounter from Fantasy Flight Games.

Cosmic Encounter is a game of crafty negotiation and hand management for up to 5 players. Working with and against other players as well as playing the right card at just the right moment are the keys to success.

Each player in Cosmic Encounter has the same goal, establish 5 colonies on alien worlds to win the game. At the beginning of the game each player is dealt a hand of 8 cards. These cards take 3 forms;  encounter cards, artifact cards and flare cards. Encounter cards are used to resolve encounters between players, artifact cards are usually one-off cards that have specific actions such as cancelling other cards or harming another player, and flare cards invoke use of an alien power. All of these cards indicate which phase of the game they can played in.

In addition, each player chooses which alien race they will play as throughout the game. Each alien race in is unique and has a special power that is used throughout the game. Each alien race indicates during which phase their power may be used and whether it is optional or mandatory. The variety of powers is impressive and includes things like swapping cards with your opponent, winning the encounter by losing, and being able to ally yourself with any player in an encounter even if you weren’t invited, just to name a few. The interactions between alien powers is one of the most interesting parts of the game and help make each play of Cosmic Encounter a unique experience.

A turn of Cosmic Enounter goes through 7 distinct phases:

2. Destiny – The current player will draw from a ‘Destiny’ deck that indicates which other alien race the player will attack. This prevents players from ganging up on any one player and introduces an element of chance to the game.

3. Launch – The current player will select which planet they are going to attack and show how many ships they are committing to the attack.

4. Alliance – Both the attacker and the defender may invite other players to ally with them. If victorious, allies of the attacker will also receive a colony on the planet and gain a point, while allies of the defender will be able to draw cards to replenish their hands. (Note: Generally, this is the only way to replenish the cards in your hand. There is no phase that includes ‘draw cards’.) This is usually one of the highlights of the game as each main player (attacker and defender) tries to convince the other players to join their side.

5. Planning – Both the attacker and the defender choose which card they will play from their hand.

6. Reveal  – Each player reveals their encounter card. This is also the phase when allies may play cards if applicable. (There are a limited number of cards that can be played by allies.)

7. Resolution – The winner of the battle is determined. If the attacking player wins, they and their allies place a colony on the planet and score one point. If successful, the attacking player may choose to have a second encounter. If the defender wins, the current player’s turn ends and the next player begins their turn starting with phase 1. 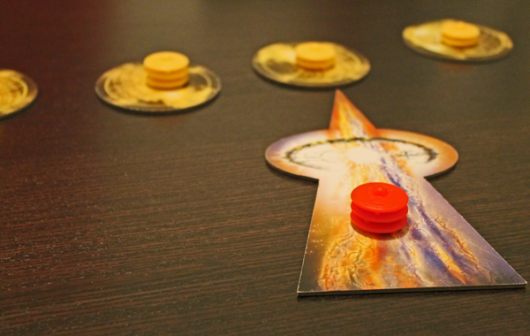 Red mounts an attack on yellow! Will either be able to convince allies to join their cause?

Once a player has placed 5 colonies on 5 different alien worlds the game immediately ends. Through negotiation and allies it’s even possible to have multiple winners if two or more players each receive their 5th colony on the same encounter!

The components are high quality, as is usual from Fantasy Flight Games, and the alien theme is strong on all components. The encounter cards are on good stock (though I would still recommend sleeves) and the illustrations of the aliens on the alien race cards have a very fun feel to them.

Intermediate. While the basic gameplay is fairly straightforward the wide variety of alien powers and their interactions can cause a fair amount of confusion when playing new aliens or playing the first few games. Timing of phases can also be tricky due to cards, powers, etc. The rulebook does a good job of helping sort this out but it can be confusing at times.

Excellent. Due to the wide variety of alien powers and their interactions no game of Cosmic Encounter is ever the same. On top of this is the meta-game of constant negotiation with other players which is one of the big reasons for Cosmic Encounters long term success. (The first version of this game appeared in 1977!) In addition to the base game which comes with 50 aliens, Fantasy Flight Games has published 3 expansions which contain another 20 aliens each, as well as components for another player. With all three expansions that’s 100 aliens and a game that supports up to 8 players!

Final Thoughts:
Cosmic Encounter is a fantastic negotiation game that shines with player interaction. Each encounter is an opportunity to make (and lose) allies in a constant struggle to get 5 colonies on alien worlds. Many players can tell you of specific instances of Cosmic Encounter where someone ‘betrayed’ them sometimes months and even years later! Each game of Cosmic Encounter will definitely take you to some far-out places with wacky alien races, but what you will remember is the great time you had playing with your friends!