You are reading
Drake : The Dragon Wargame Launched On Kickstarter 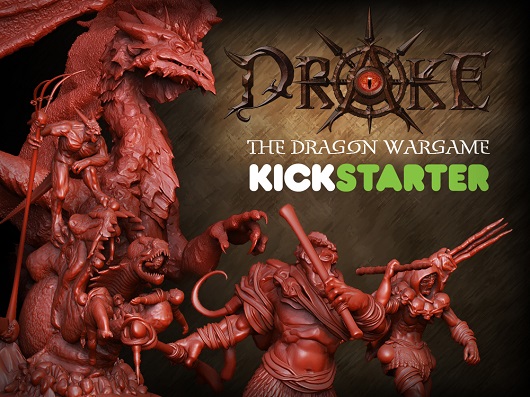 I’m a big fan of miniature games, and I fall head over heels for anything involving dragons. My interest was piqued and a smile graced my face when I came upon a game that combined both of these interests of mine. Action Games Miniatures brings us Drake : The Dragon Wargame, which uses 28mm miniatures, dice, tape measures, and game cards to take on other massive dragons and their minions.

Drake : The Dragon Wargame takes place in a world where mighty dragons have been in a slumber for millions of years. These dragons have woken up to a world torn apart, and assemble factions in the world of Dara using violence, wits, and the power of diplomacy. Human warriors and various beasts will aid your dragon leader in an attempt to conquer your enemies and claim Dara as their own.

I most certainly was not the only person excited about this idea, and the numbers on the funding page made that clear. It took less than one day for the game to reach its goals on Kickstarter, and day two brought the success of the first stretch goal. The next stretch goal to be unlocked at $32,000 and it is fast approaching. Action Games Miniatures is taking no chance at mediocrity, taking care to present only the best of what they can offer. An update from the funding page says;

“The art department headed by Adam has been cranking these models out at a furious pace.  We’re all sticklers for detail so we like to get things right before we show stuff.  The next batch of stretch goals is being worked on and there is some great stuff coming down the pipe, including some free stuff for Army boxes and higher pledge levels.”

Funding for Drake : The Dragon Wargame will end on April 20th, so be sure to head over to its Kickstarter page and get in on the amazing perks that are available for the backers. If you don’t take my word for it, let the folks over at Action Games Miniatures prove the magnitude of this game by browsing the images they’ve posted. I believe that the game will see tremendous success after manufacturing begins and there is no doubt that Drake will have a place on my shelf.