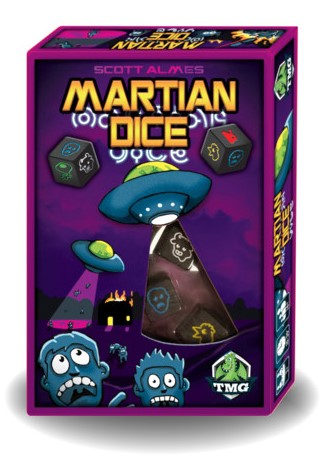 Picture, if you will, that you are an invading Martian commander that is standing on the bridge of your ship. You have been sent to a new world to capture the pathetic life forms inhabiting it and sort out who is in charge of this mud ball. Well, in the fantastic and fun game of Martian Dice by Tasty Minstrel Games this is exactly what you are. There may be a ton of dice games flooding the market but this one is a blast and deserves your full attention, Earthlings.

In this game you are taking the role of alien invaders. You are trying to collect samples of the various life forms while fending off the defense that the humans muster. This game looks like most dice games when you first look at it. It comes in a standard tube and the dice are high quality molded and painted plastic. The major fun factor begins with the game play!

To begin you pick a starting player at random. To make it more fun you can always do something silly like who can come up with the best new alien name goes first. The starting player rolls all of the 13 dice to start their turn. On each of these dice are: 1 tank side, 2 death ray sides, 1 human side, 1 cow side and 1 chicken side. After a player rolls, he must first set aside all tanks that are rolled. You must always collect tanks even though that will often be the last thing you want to do. The tanks represent the human resistance to the alien invasion. After you have set aside the tanks you now must decide what other dice you want to set aside from this roll. The death rays represent your defense against the humans and the other dice represent a possible specimen for abduction. Each time you roll and decide to take either: death rays, humans, chickens or cows you must always take your total number of that group rolled.

This is where the strategy and depth of thought come in because if you roll a few death rays but decline to take them, and you can collect a specimen, that could burn you on later rolls. You continue to roll until you can no longer collect a specimen or you decide to stop. If at the end of the set of rolls there are more tanks showing than you have collected death rays than you have been defeated and all specimens collected are not scored. If you have at least as many death rays as there are tanks then you have successfully overwhelmed the humans and you score all collected specimens that you have in your possession. All specimen dice are worth 1 point each. You are however awarded a bonus of 3 points if you collect at least one of each species. The game continues around the table in the typical manner until one player reaches the score of 25.

The world of tabletop is flooded with dice games of a million different varieties. Some are good some are ok and some are just plain pathetic and miserable. Martian Dice falls into a category all its own. It has interesting mechanics that forces you to play the odds and strategically plan each move you do. It is hard to plan a strategy based on the roll of a die, but Martian Dice leaves you no other choice. In doing so it creates a game where you will hold your breath on whether or not your raid succeeds against the feeble humans. So gather up your comrades and board your ships. This game is too much fun for one planet. I loved it and I think you will too!