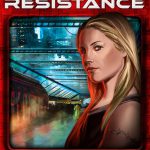 You are reading
Written Review – The Resistance 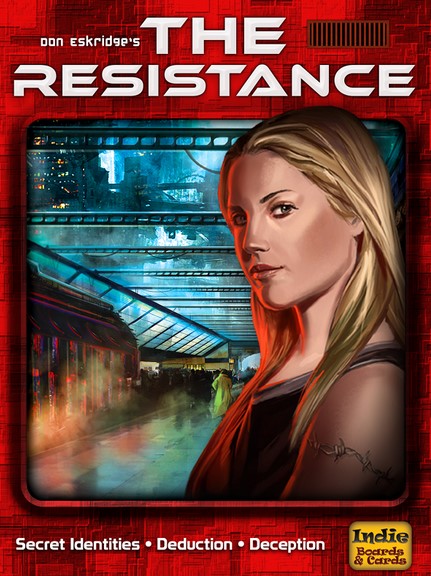 I’d heard great things about this game called The Resistance from more than a few sources, and once I had the chance I finally picked the game up. It’s published by Indie Boards & Cards, and it while it’s gotten a lot of praise from those who have played it, the game has found a way to slip under the radars of many in the community. I picked the game up and once I got it to the table my group was compelled to play game after game, draining the nightly hours away.

The Resistance is a card game in which players take the role of either the Resistance members, or Spies infiltrating their ranks. Dedicated to harboring the fall of the Empire, Resistance members must set out on missions that will do many things from destroying key bases, sabotaging information, and much more. Spies, on the other hand, will seek to infiltrate the ranks of the Resistance and cause their hard work to fail by employing some sabotage of their own.

The story behind The Resistance is more of an idea than an actual plot. The missions in the game aren’t detailed, and players are free to make up whatever happens on each mission. As long as the core idea of Resistance versus Spies is in the game, it will play itself out.

The Resistance has undergone a visual update since it first released and it looks amazing. The art on the cards is very cyberpunk-esque, and it reminds me of the Netrunner universe. In the latest edition players will find:

Each of the cards is made out of thicker stock, so they are much more durable than normal cards. The mission cards are detailed, full of great art, and are just the right size. Each of the tokens is thick enough to avoid being brittle, yet they aren’t so tough that it becomes inconvenient.  This is actually one of the very few games I don’t feel I need to sleeve in order to keep it protected.

Now we’ll get to the nitty-gritty part of the game: how to play it! It just-so-happens that I am a fan of the Battlestar Galactica Board Game, and I love the whole “espionage/betrayal” mechanic it employs. The Resistance follows that same mechanic and it actually puts the main focus of gameplay on it.

When you sit down to play the game, you’ll choose a mission card based on the number of players (The Resistance supports 5-10) you have. Each game will consist of five missions, each with a varying number of members required to participate. This number varies depending on the total amount of players in the game.

After this, each player will get a set of vote tokens, and all other tokens will be set up according to the rules placement for the mission board. Players will all look at their identity cards at the same time, and then put them down. They’ll all then close their eyes, and the Spies will open theirs to look at who each Spy is being played by. All players will then open their eyes and the game will begin.

Each mission has a certain number of team members required to complete it. The player with the party leader (first player) token automatically goes on each mission. To fill the other positions they will hand out team tokens to other players, choosing them for the mission. At this point you have to decide who you want on your team depending on your identity in order score the mission. Once the members are chosen all of the players vote whether they approve the team or not. This is a majority vote.

If the vote passes then you move on to the completing mission phase, but if it doesn’t some things happen. The team leader token passes to the next player (going clockwise), and the mission select phase starts again. The new leader will select a mission and then select members to accompany them. If at any time you get five unsuccessful votes in a row, the Spies automatically win the game!

If the vote for the assignment passes, we go to the mission phase. During this phase the members sent on the mission will each draw a set of mission cards, made up of one success card and one fail card. They’ll then choose and play one of them, discarding the other. The team leader takes their chosen cards, shuffles them, and then reveals them. If all revealed cards are success cards, the mission succeeds and the Resistance members place a token on that mission. If just one of the played cards is a fail, however, the Spies have succeeded and place one of their tokens on the mission instead. No matter the outcome, the team member tokens go back to their pile and the team leader token passes clockwise to the next player. Then the round starts anew.

Play proceeds like this through each mission until one side wins the game. Through clever deduction and well-placed team members, players can figure out who are Spies and who they can trust. Gameplay lasts for around 15-30 minutes per game, and no two games are ever the same.

I firmly believe that The Resistance is one of the single best games that has graced my table. My group played seven to eight games consecutively. We just couldn’t get enough of The Resistance, and I know that once you get the game in your hands you won’t either. The game started off a bit slow, but it quickly became emotional and enduring. It was really hard betraying my friends, but the more I played as a Spy the more I liked it. The Resistance takes a simple mechanic and puts a spin on it that will make you hopelessly addicted to playing such a great game – and that’s perfectly okay.