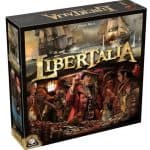 You are reading
Written Review – Libertalia

Do you like booty? What about pirates? If you like pirates and/or booty (and as we all know pirates love booty!) then set a course for Libertalia, by Paolo Mori from Marabunta games.

Libertalia is a card-based strategy game focused on the second best part of being a pirate, dividing up all the shiny loot you’ve earned from pirating. (I’m working on the assumption that the absolute best part of  being a pirate is the  pillaging but I could be mistaken.) Each card represents a different character in a pirate’s world from various crew members such as the First Mate to the Spanish Governor (and of course his lovely daughter!). Each card has a numerical rank from 1 to 30 with 1 being the lowest to 30 being the highest. Each card also has at least one special ability included on the text of the card.

Some of the many characters you will encounter in Libertalia.

The game takes place in three turns consisting of 6 rounds each. Each round represents a day of the week where the crew will be dividing up that day’s haul of illicit booty.

The treasure, or  “booty tiles” are variable and are randomly drawn from the “booty bag” at the beginning of every week. Different booty tiles have different scoring values and some of them have negative effects such as killing the character that takes them or causing that player to lose points.

At the start of each round, each player selects the card they wish to play that day and they are ordered on the ship by rank on the ship (gameboard) from lowest to highest. Then the player who played the highest ranked card picks first from that day’s treasure, followed by the player who played the second highest ranked card, and so on until all players have taken a treasure or there is no treasure left for that day.

Libertalia in action! The Spanish Governor is about to be thrown overboard by the Brute!

While the gameplay rules are relatively simple there are two unique mechanics that make Liberatalia stand out in the crowded sea of card games.

First, the special text on each card will often change the order of picking treasure during a specific round. For example, I really want that gleaming treasure chest and play the Spanish Governor (rank 30) which puts me in a position to pick first that day. Unfortunately, one of my opponents plays the Brute (rank 14) whose special ability is to throw the highest ranked card off the ship before treasure is picked. Thus, instead of getting that shiny chest my character is thrown overboard and I get nothing. Each of the 30 characters has different special abilities that can affect the outcome of the game adding a very fun layer of strategy.

Second, Libertalia has a very unique card hand mechanic I have yet to see in any other game. Card hands are not dealt out randomly, drafted or built as you play like many current deck-building games. Instead, each player starts with the same cards. During the first turn, each player is given the same 9 cards. During that turn 6 cards will be played leaving each player with three cards. All players will then be given the same 6 new cards on the next turn resulting in a new hand of 9 cards. Thus, throughout the game you have a rough idea of what other players have in their hands but you can never be exactly sure. This adds another layer of strategy as playing the right card at the right time is key to picking the treasure you want that day.

The components are high quality and the pirate theme is strong on all components. The cards are on good stock (though I would still recommend sleeves) and the card art is excellent.

Fairly light. Experienced gamers will pick up on the mechanics fairly quickly. Some of the card text interactions can be tricky but the rulebook does a good job of explaining how to deal with any conflicts.

Libertalia is an excellent game with a unique card hand mechanic and very strong theme throughout the game. Libertalia supports 2-6 players (best with 4-5 in our games) and once players are familiar with it takes about 40-60  minutes per game. While some players may be put off by the hand mechanic, it’s that limitation that provides the game with most of it’s strategic depth. I highly recommend Libertalia for people looking for a quicker  game that still has enough depth to make it worth your while. Like a good pirate, Libertalia strikes quickly, grabs the booty and sets sail before it overstays its welcome!