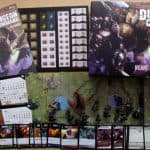 You are reading
Written Review – Dungeon Command: Heart of Cormyr

So you like 4th Edition D&D’s tactical nature but it’s not a fit for you in terms of an RPG? Or maybe you like Magic the Gathering’s card play with its ‘stack’ concept, ability to respond to an opponent’s plays and customizable deck to show off combinations that you find among the cards? Or maybe you just like to play with miniatures? And why not? What’s the matter with that, huh? Not a thing, that’s what.

If you enjoy any or all of those kinds of game play, I’ve got good news! Dungeon Command from Wizards of the Coast might just scratch those itches for you. It’s a skirmish game played on interlocking map tiles that uses miniatures and cards to send your legions after your opponent’s legions to fight for map supremacy.

Each set comes with miniatures, cards and map tiles centered on different themes: Tyranny of Goblins, Heroes of Cormyr, Sting of Lolth and Curse of Undeath, with more on the way. The twelve miniatures in each set are the war band that you will use to prove your dominance. I like the variety of critters and the thought put into the abilities for each one. Those abilities are thematic to each critter and war band and very complimentary with one another, allowing for nice synergy. For my money, the minis in these sets also look fantastic, especially for pre-painted plastic sculpts.

The cards for each set are split into three types: Standard, Immediate and Minor. These terms are probably familiar to anyone who has played D&D or some other RPGs and, luckily, they translate well to the skirmish format. Standard cards are played on your turn during each creature’s activation. These are usually special attacks or magical effects. Immediate actions are like instant cards in Magic the Gathering, usually played on your opponent’s turn as a response to their attacks. Minor cards are usable on your turn and are the only cards with no use restrictions.

The tiles have two sides, an outdoor scene and a dungeon scene, showcasing features that play to the strengths of the creatures in that set. The neatest feature of the tiles is that they snap together with the tiles from opponent’s sets to form a new, larger battlefield that can be different each time based on layout.

Pros: For my money, I really enjoy this game. Once you get the basics down it is pretty fast paced while still having the ability to be a deeper strategy game if you choose to really invest in it. You can combine your cards and minis to make your own war band, totally customized to your play style.

Cons: Like Magic the Gathering, your hand of cards is dependent on luck. However, I prefer this kind of randomness to dice rolls in most skirmish games. Also, each set is a tad costly for a casual game, though cheaper than a lot of skirmish games.

Uncle Ed’s Edict: Though perhaps a little pricey, Dungeon Command provides customizable, fun play that is highly repeatable. Look for it discounted but get it!