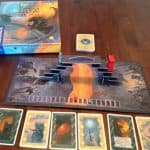 You are reading
Written Review – The Lord of the Rings : The Duel 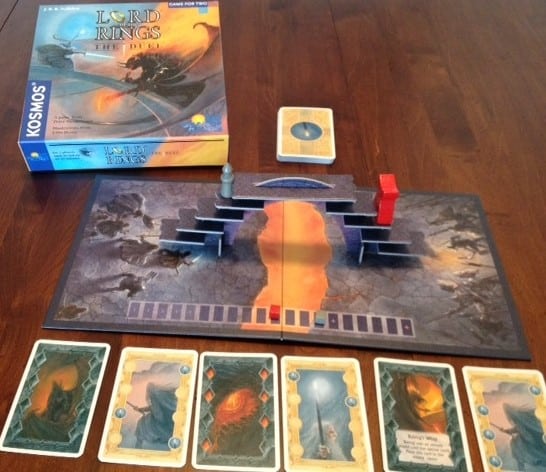 Anyone who knows me knows that I am a big fan of The Lord of the Rings. I have played many games based off of Tolkien’s stories, but while attending a game auction at a Missouri game store, I saw a game I had not seen before : Lord of the Rings – The Duel. I placed my bets and walked out triumphant with my new game, and was anxious to see what it was all about. The game was published in 2002 by Rio Grande games, and created by a German named Peter Neugerbauer. This two player game may look confusing at first glance, but quickly climbed towards the top of my favorites list in regards to two person games.

Upon opening the box, you will find a sheet of bridge pieces that pop out for assembly, a rectangular game board, an instructional booklet, a gray figure representing Gandalf, a red Balrog figure, an energy marker with corresponding colors for each player, and a deck of 54 cards. The interior of the box has cut-out inserts for storing all of the pieces, including the assembled bridge.

The cards are illustrated by John Howe, who has been involved with many publications of Tolkien’s works, One half the deck is adorned with fire and monstrous portraits of the Balrog. The other half, framing an old, bearded wizard, Gandalf.

This game is played in 4 separate duels. In the first 3, the player draws 9 cards from their deck. Each of the first 3 duels will consist of 6 cards from each player. At the end of the duel, the remaining 3 are set aside for the final fight.

Each card has 4 markers down either side. Some will be filled, others will be blank. The markers on the left side of the card are defensive magic symbols, and the ones on the right are offensive. Gandalf always initiates the first duel. This player will select a card from their hand to use as their first offensive card. The Balrog player will then play his responsive card for defense. The exchange is then settled. If a row on both cards contains no magical symbols, there is no effect. If one card’s attack is undefended, the undefended player’s energy marker drops. If both players defend, there is no effect.

Once the exchange is settled, the card that the Balrog played as a defensive card now becomes his offensive card. Gandalf then plays his response to the Balrog’s last card. Some cards have magical effects, such as forcing a card into the final duel, one player removing a card from the other’s hand, and reversing a card’s effects against the opposing player. These effects are always resolved after the exchange has been settled. A booklet that comes in the box clarifies some of the magical effects in case the text is unclear at the time.

The duel winner is determined by the player who’s marker is highest on the energy track. The winner moves 1 step when there are 0-2 empty spaces between the markers, 2 steps for 3-4 spaces, and 3 steps for 5 or more. In the case of a tie, the loser is the starting player, which will always be Gandalf in the first duel. In the next two duels, the loser decides (after looking at his cards) who goes first.

If at any point during the duel there is 3 or more spaces between each player’s energy markers, the player with the most energy may look at the opposing player’s hand to get an idea of what may be coming. The duel will end when each player has played 6 cards (except for the final duel in which 9 will be played), or when an energy marker enters the negative part of the track. The game has the possibility to end before all 4 duels take place, however : If one player’s marker reaches the top step of the bridge, that player wins the game.

Some nights, you want to play a strategic game that doesn’t require hours of your time, and this game fits the bill. If you are a fan of The Lord of the Rings, or if you’re just looking for a fun two player game, I would certainly recommend this. It offers quick, somewhat tactical gameplay that is fun from beginning to end, and you’ll never play the game the same way twice. The special ability cards add a lot of surprise to the game, and they can save you when you least expect it. Surprisingly, you can find this game for a low price right now, and it is simple to pick up and play.